The title of today’s article is actually something of a fib, as cooking opportunities were limited. But among the wonders and delights of travelling, the chance to sample other culinary cultures is a major one. They say that there is nothing new under the sun. Even if that were true, it is fascinating to observe the subtle, and sometimes not so subtle, differences in the way that familiar ingredients are handled.

As a country Costa Rica is a delight, an example of what can be achieved when a nation is led by statesmen of vision. Some seventy years ago, they dispensed with an army, choosing to invest the money in a health service, agriculture and conservation. The result is a prosperous nation with average life expectancy and adult literacy rates on a par with, or perhaps higher than, those in the UK.

I had no knowledge of the food, and was expecting a cuisine similar to that of Mexico. A major surprise, then to find that chilli features very little, and spicy food is rare. Less of a surprise to find that beans are a staple, together with rice which was introduced by the Spanish, the Moors having brought it to Spain. Rice and beans can be fine things: they can also be very dull. How do you jazz them up without heat? The most common dish is called Gallo Pinto, literally speckled cockerel. This is frequently jazzed up by adding some protein of choice, but it may also be served simply as a breakfast dish. I ate it on a number of occasions, and was unable to place the flavour. Having done some research, I discover that the secret ingredient is Salsa Livano, a condiment invented in 1920 by one Prospero Livano. Despite now being made by Unilever, it seems to be unavailable in the UK. My sources suggest that it is not dissimilar to Worcester Sauce, with perhaps a little more cumin. I’ve suggested these alternatives in the recipe. 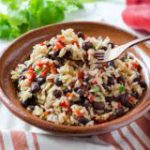 Cook the onions and pepper in the oil and fry gently with the garlic until the veg are soft. Add the beans, cooking liquid, Worcester sauce and cumin. Simmer for about five minutes then stir in the rice. Heat gently till the dish is hot through. (Make sure it’s not too dry.) Season to taste with salt, pepper and extra Worcester sauce, then stir in the coriander. This can be served as it is, or topped with chicken or pork.

Ecuador and the Galapagos

The closest I got to actual cooking was being chef’s helper at a small cookery class on a boat in the Galapagos. As well as three nights on a boat, we also stayed for a few days on Santa Cruz Island. A friendly local pointed us in the direction of Lo&Lo’s tucked away in a back street, where we ate very well. The highlight was Fanseca, a dish made only in Holy Week. Think Cullen Skink with salt cod instead of haddock, and beans in the place of potatoes. Ah, were it that simple. The excellent version which I had contained black beans, young broad beans and something akin to a kidney bean. I then read that by tradition, twelve types of bean are used, to represent the Apostles. These are cooked separately. Altogether too involved, and, anyway you’d have to wait for the best part of a year to make it. Instead, I return to the MV Legend and give you an Ecuadorian version of ceviche. You may recall that a couple of months ago I shared a fairly classical recipe. This is perhaps a little less pure, but the end result was very good. The reference to tomato water, as used by the chef, was to tomatoes skinned, blitzed in a blender, sieved, and a little water added. You could simply use tomato juice, or the liquid from a tin of tomatoes.

Gently mix all the ingredients together, apart from the salt pepper and coriander. Season to taste with s & p. If you’re not serving at once, refrigerate, and mix in the coriander immediately prior to service. 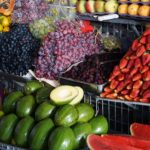 PS As ever the food photos are not my own, but stock images. By contrast, the photo on the right is one of mine, taken in a market in Guayaquil, Ecuador. Look at those avocadoes. They were the size of a small honeydew melon.