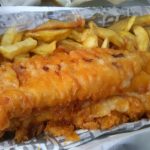 Don't let the two week break make you think that activity here at Casa Johnston has slowed. Au contraire. My willing helpers, PAs, research assistants, sous chefs and food stylists, have been beavering away as usual. No furloughing here. Material for future On The Side columns is tucked away in the can: recipes for Tom Cooks! are being checked, calorie counted and stress tested. But Tom Eats!? Well, that's another matter.

I've spent some of the time looking at what the pros are doing. We'll come to takeaways in a moment. It is clear from reading the columns of many food scribblers, that they are not cooks. That is not, nor should it be, a bar to expressing an opinion. Any football fan can (and does) vent his or her views, usually in trenchant terms, despite never having played the game at any level, nor having the faintest clue about the basics of managing or running a business. But it's hardly a surprise that the most respected pundits have had a long career in the professional game as players, managers or both.

Jay Rayner, for me the best of the reviewers currently plying his trade, is, I believe, a pretty decent cook: my all time favourite, Jonathan Meades, restaurant reviewer for The Times  before Giles Coren, was an exceptional one. But Marina O'Loughlin, of The Sunday Times? The fact that she never ever seems to eat at home made me suspicious of her prowess at the stove. Neither Rayner nor O'Loughlin is writing about takeaways. Jay has written three pieces since he ran out of restaurants, each one a gem. What Makes A Restaurant A Classic; 30 Years of the Great British Gastropub; and Chain Reaction: The Ups and Downs of Britain's High Street Stalwarts. I don't think the man could write badly or boringly if he tried.

Our Marina, on the other hand, came up with the bright idea of cooking the same dishes alongside (online, obviously) a professional chef, incorporating an interview. (Think Tom Cooks!  and Chef Watch combined.) Angela Hartnett is always interesting, and Sunday's piece, including a fairly simple chicken recipe, was reading well - until I discovered that Marina doesn't know how to joint a chicken. Not a heinous crime, I concede, but henceforth I'll look at her work in a different light. 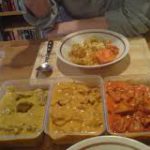 Closer to home (ie in Scotland) the usual suspects are lowering their game (even further) as they open up their wee cartons and boxes on their kitchen tables. See the depressing images to give you the idea. One lady was being snotty about the fact that some pastry had broken in transit. Complaints about temperature - probably because they don't know how to operate an oven or a microwave - seem to be common. Only a matter of time before they're awarding points for service, based on the demeanour of the delivery driver. 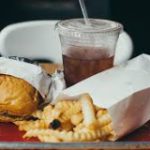 You may think I'm becoming fanciful; however, consider one of Scotland's daily papers whose critic scores on Food and Ambience. I have reservations about the latter criterion, especially when it makes up half of the score. The atmosphere in a restaurant at lunchtime will differ from that at dinner. And some may be looking for music and buzz, whereas that may be anathema to a couple looking for a quiet night out. Anyway, the lady in question STILL uses Ambience in her reviews of takeaway food. Does the variation in scores depend on how well the table has been set? Or whether she's washed the cloth recently? It's stupidity such this this which makes me despair of food writers - and makes me think long and hard about the Tom Eats! columns for the next few weeks. I dare say I'll succumb to the odd takeaway, but this has got me thinking about what it is I enjoy so much about restaurants over and above the food. Hmm, I can sense a new blog in the making.

In the meantime, best wishes to all chefs and restaurateurs out there. If you are supplying  food for delivery or takeaway, send me your details and I'll include them in future blogs. Check the internet for details of places near you. Don't miss this week's Chef Watch, featuring Campbell Mickel, whose catering company Exec Chef Cuisine is still trading and delivering almost as normal.