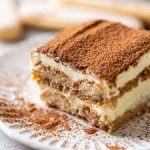 Having mentioned tiramisu in Wednesday's On The Side, it seemed rude to let it pass by today's column. Sadly, it has become a bit of a cliché. You are unlikely to find many dessert menus in Italian restaurants from which it's absent. Yet the reason dishes become so ubiquitous is that they sell well. Put simply, we love the stuff. If you don't care for it, you may have been subjected only to one of these over whipped, over refrigerated things, with whipped cream bulking up, or even replacing, the mascarpone.

So, if you read On The Side, you will know that it was invented in 1971 in Treviso. Or was it? The name means pick me up in the Veneto dialect. A colourful legend suggests that a local brothel keeper served it to customers to invigorate them before they went home to their wives. Food writer Gigi Padovani spent time researching (the dessert, that is, not the brothels). He concluded that there was evidence to suggest it may have originated in nearby Friuli-Venezia Giulia as early as the 1950s.

In basic terms, the list of  ingredients is fairly simple; sponge fingers, eggs, sugar, mascarpone, coffee, with some cocoa to garnish

At the recent European football championships, when Italian tifosi (fans) were poking fun at the English, one of the placards said, No Cream In Carbonara. They might equally have read, No Cream In Tiramisu, though no less a figure than Anna del Conte would say differently.

That short list, however, throws up a number of issues. Firstly, note that this is a dish which contains raw eggs. They should therefore be as fresh as possible, and the dish isn't recommended for pregnant persons. (I am terrified to type the word women for fear of a woke backlash.) The type of sponge will vary. In the UK, I think they are known as boudoir biscuits and often used in trifles. In Italy, recipes which I have seen recommend Savoiardi Ladyfingers, and you can find a recipe to make your own at bit.ly/3c50nVm.

These will eventually be flavoured with liquid. It's important that they aren't soaked otherwise they will just disintegrate; but the more important question relates to the liquid. Coffee, obviously, espresso for preference, but with what? A bit of booze is great. My own preference would be brandy or rum, but Marsala is traditional too. You can make individual ones, but I think it looks good in a glass bowl (square or rectangular will make your life easier) as it shows off the layers.

Finally, the cocoa element. A mean spirited person will just sprinkle a little on top at the end. Anna del Conte likes to add chocolate pieces among the layers and top with chocolate covered coffee beans. I prefer roughly grated chocolate on top.

If using, add the alcohol to the cooled espresso. Whip the egg whites to stiff peaks. In a large separate bowl, beat the sugar and egg yolks until pale and creamy. Stir the mascarpone to soften it. This will be easier if you take it out of the fridge at least 30 minutes before using. Stir the mascarpone into the egg yolk/sugar mixture, then stir in the egg whites. While you want to do this gently and take a little time, the mixture must be well combined.

Quickly dunk your sponge fingers in the liquid (see the warning above) and form a layer at the bottom of your serving dish. Cover with some of the mascarpone mixture, then repeat. You should have at least two layers. Sprinkle generously on top with cocoa or grated chocolate (or both).

Cover and refrigerate for at least a couple of hours. Overnight will do it no harm. And don't forget to drink a toast to Signor and Signora Campeol.