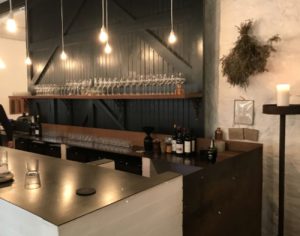 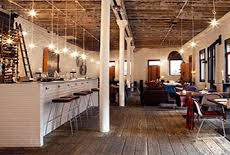 On this very spot, many decades ago, my wife was severely reprimanded. For God's sake, hen, dinnae bash the one at the bottom!

So you're not going to guess? Very well, I'll continue. As the name implies, this space was once home to Lawson's Builders Merchants, purveyors of timber and other building requisites. L had a new flat in need of quite a bit of work. Partly due to impecuniosity and partly due to the confidence of youth, she became an enthusiastic DIYer, happy to turn her hand to anything. Plastering became a specialty, and the Lawson's staff were ever obliging with handy helpful tips. There was, however, a problem. Not only did her jobs require only small quantities of plaster, she couldn't carry a whole bag up umpteen flights of stairs. Fortunately, it was usually possible to find a split bag from which they would be happy to sell a smaller quantity.

One day, disaster. All plaster bags intact. What to do? Just give one a kick, she was advised on the QT by a friendly staff member. So now you understand the reprimand. But she got her half bag, and learned an important life lesson. 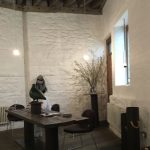 If that friendly staff member were to return to the place today, he would have no problem in recognising it. I think that industrial chic began with warehouse conversions in New York, and is now to be found everywhere. It has been applied here to very good effect. Relatively little has been added to complement the whitewashed brick, and the simple, stark finish and light fittings give an elegant effect.

The Radford family have been running restaurants in Edinburgh for almost as long as industrial chic has been in vogue. Timberyard is ten this year, and before that there were Blu and The Atrium. Dad Andrew no longer cooks. I think son Ben is in charge of the kitchen now, but it's very much a family affair. Dad, I believe, does a lot of foraging, which is very much reflected in the food. For chefs with a shortage of skill, this can result in disaster. I remember once being served a "foraged salad" which tasted as though someone had dug up a chunk of their lawn. Things are significantly better here.

Wild garlic is absolutely in season. (Bear in mind there can be a three or four week time lapse between scoffing and publication, so don't write in.) I have had this many ways, but never quite like the broth which was served beside a St Andrews cheese gougère. It was green, it was creamy (despite being completely vegan friendly), it was it was foamy, it was sharp. Utterly extraordinary, utterly delicious, and I have no idea how it was made. Let down a wee bit, sadly, by the accompanying gougère. Light and tasty enough, but I prefer my cheese puffs served warm.

The menu is in four parts. This came from the section which is generally referred to these days as snacks, a little confusing as it also contained bread, oysters and crispy mutton shoulder. Starters proper came in the form of the very first British asparagus of the year, served in a different green broth. That'll keep the kitchen on their toes. The asparagus was not so much al dente as raw. I have no issue with that, but my first mouthful made me think the seasoning was out. How wrong can you be? Delve into the bowl and you get a salty tang from spenwood, a ewe's milk cheese. There is texture from hazelnuts, depth from a hidden egg yolk, and a flavour I couldn't identify, which I assume to be the advertised lovage. Clever modern cookery.

The skill continued into the main courses, but more and more we found ourselves eyeing up the accompanying price tags. Market fish turned out to be that pricey little star, turbot. Kitchens must, of course, have an eye to their margins, but I think they'd be doing OK out of this dish. A couple of bits of fish measuring in total about eight by three centimetres, and one and a half Jersey Royal potatoes will set you back £29. That's a pound more than my wood pigeon. The two pieces, about one and a half breasts in total, were very pink and wonderful. There were tiny pieces of something crunchy on top - chestnuts I was told - plus a translucent sliver of lardo. The accompanying morels were sublime. The only off note was the price. I have in my freezer a pack of pigeon breasts about three times the size of my portion. That cost me four pounds retail. Yes, I know the price of morels and lardo.....  but you get the point.

It's a big space which filled up rapidly, and they employ a lot of people. We were looked after primarily by Charlie and Zoe, lovely people both. Now we were in no particular hurry; however, there is a fine line between service which is leisurely and that which is slow. We found ourselves looking at our watches quite a lot and gazing hopefully in the direction of the kitchen.

If pudding is your thing, there's a choice of two plus cheese. On the day of our visit the choice was Chocolate, salted caramel & buckwheat or Lemon thyme & butterscotch.

I've just finished writing a review of John le Carré’s latest and last novel. The endings of many of his books leave the reader with a great sense of ambivalence. At the risk of finding myself in Pseud's Corner, I'll just say that I left here feeling the same way.