As I wrote on Wednesday, I love limes. Having said that, I don't go along with those who opine that they are interchangeable with lemons. Sometimes (indeed quite often) you just need that sharp, dish-enhancing zap which you'll get only from its yellow cousin. But limes can be used at any stage of one's menu. Starting, of course with an aperitif. 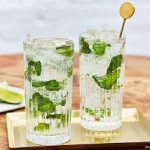 My original plan had been to write about the joys of the daiquiri, and I headed for the detail of Hemingway's favourite version, the Papa Doble, as created for him in Sloppy Joe's Bar in the Florida Keys. To my surprise, I learned that this version was made with pink grapefruit juice. Hemingway was diabetic (not sure I knew that either) and would have avoided the sugar necessary to make a lime version palatable. So another classic instead.

Top tip - to get the maximum possible juice out of a lime, microwave it at full power for 30 seconds. If you don't have a microwave, roll it quite firmly on a flat surface.

50 - 70ml white rum (ie a double measure, depending on how strong you want it. Feel free to tip in a bit more if you like - I won't tell); juice of 1 lime (see above); 1 tsp granulated sugar; handful of fresh mint leaves; sparkling water.

The recipes talk about muddling the mint. Not helpful if you don't know what that means. Put the mint, lime juice and sugar into a solid container or jug (not a glass as you might break it.) Using the end of a rolling pin, gently pound the mixture. You want to release the oil from the mint leaves, and the sugar to dissolve. Put a generous quantity of ice into a tall glass and add the rum. Then pour in the mint and lime mixture and stir well. Some fresh mint for garnishing looks good. 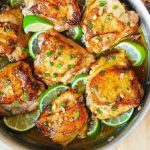 Before starting today's column, this was a dish I'd never made. I looked up various recipes and played around with them a bit. My version is based on the Asian classic combination of sweet/sour/salt/hot, but you can omit the chilli, or use more as you wish. Do make sure you chop it very finely. Olive oil isn't traditional, but I wanted a marinade which was a bit runnier at the outset, though I thicken it later in the process.

I would always use thigh meat in preference to breast, as the latter are more prone to becoming dry.  Bone in is more traditional, though chicken thighs are often sold as fillets. For this dish I'd remove the skin.

Remove any fat from the chicken. Cutting the thighs in half will make them go further - your choice. Cut one or two slashes in each piece.

Mix all the other ingredients in a bowl and stir well. Add the chicken, making sure it's completely coated. Cover and leave to marinade for a few hours, giving the occasional stir if you remember. The advantage of having a very liquid marinade is that it's easier to get all the meat covered.

Preheat your oven to 190˚C/Mark 5. Once it's up to temperature, put the chicken in a baking tray and cover with half of the marinade. Cook for 15 minutes. While that's happening, put the remaining marinade in a small saucepan and reduce until it's sticky but still liquid. After 15 minutes, increase the oven temperature to 220˚C/Mark 7. Pour or brush the remaining marinade over the chicken and cook for a further 5 minutes.

As ever with chicken, make sure it's completely cooked through before serving.

Serve with rice and steamed greens (or whatever you fancy). I had some leftover rice which I stir fried with pepper, celery, broccoli, and soy, with an egg stirred in at the end. 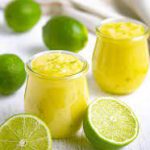 While lemon curd is widely available on supermarket shelves, I don't think I've ever seen lime curd. The recipe for both is the same. As with many  products, once you've made them at home you won't want to go back to shop bought. As ever, with dishes involving egg and heat, you need to be careful to avoid scrambling the egg. The bowl needs to be heatproof and should be above, not in, the water. It's the same technique that you use to make hollandaise sauce. If you haven't done something like this before, check the respective sizes of bowls and pans in your batterie de cuisine before you get started.

Bring a pan of water to a gentle simmer. Place all the ingredients in a bowl above the water. Stir gently until the sugar melts and the butter dissolves. Stir or whisk gently until the mixture thickens. This should take around 10 minutes. Once you reach the desired consistency, remove the bowl from the heat and allow to cool. Transfer to a sterilised jar or jars. Store in the fridge and use within a week or so. (That's the downside to home made as opposed to bought - we just can't get hold of those lovely preservatives and E numbers.)

Now my wife did know that I was writing an article or two about limes, but I still think that her buying 11 of them was a tad excessive.