The Wheatsheaf Hotel and Restaurant 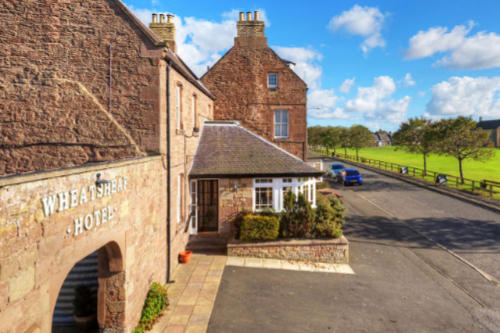 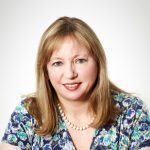 For some of us, heading off to a summer music festival perhaps prompts a trip to the Western Isles for HebCelt or a Highlands tour taking in Beauly’s Belladrum or maybe even venturing south and a little more upmarket for a trip to Glyndebourne and its flagship programme of top-class opera. Closer to home, for those in the central belt anyway, is the rural gem of a July chamber music festival in the Scottish Borders, namely Music at Paxton. Set on the banks of the Tweed and held in the Picture Gallery of the magnificent Palladian mansion, Paxton House, there is much to tempt over the course of the festival’s ten days. Traipsing up and down to Edinburgh at an hour and a half each way is clearly not the ideal way to make the most of it. But where to stay and eat for a few nights as an alternative? There is surprisingly little accommodation in the area, whether bed and breakfasts or country house hotels and a room at a charmless Premier Inn in nearby Berwick-upon-Tweed will set you back well over £100, if they even have availability, and that’s not including breakfast.

Thank goodness then for the welcoming and highly efficient Wheatsheaf Hotel and Restaurant at Swinton. Positioned looking over the large traditional green of what was an 18th century planned estate village, its rooms are reasonably priced, well-appointed and very comfortable.  On a concert free evening, there is something hugely appealing about there being no need to rush dinner and, for once in the Scottish Borders, not having to think about jumping into the car. Ice, slice and g & t from the cosy bar’s decent range of gins, whiskies and beer on draught, gives time to peruse the menu, thoughts swaying from fresh haddock locally landed at Eyemouth just up the coast to slow cooked pork belly in a village that was, after all, historically swine-town. But rosti potato, something that’s hard to master for the home cook, as accompaniment was the deciding factor for the main course choice of pan seared duck breast with black cherry sauce. Maybe it’s a vintage clichéd classic, but there’s a reason that duck and a fruit that cuts through its richness is a time-honoured pairing. At the Wheatsheaf, the duck wasn’t too pink, but soft and meltingly tender. Chef’s vegetables definitely took the at least five-a-meal approach – lots of greenery with courgettes, mange tout, French beans, broccoli and pea shoots, plus baby carrots with their tops on and sweetcorn just in case it wasn’t colourful enough. All were at their best in crisp, precision 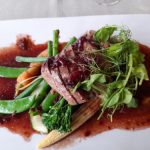 cooking although the eagerly anticipated rosti’s crispness had taken on the juices and deeply coloured sauce from the duck breast sitting atop it, so very tasty but a little soggier than it had started out. With only one main dish for vegetarians – aubergine and sweet potato curry – those who don’t eat meat or fish were better catered for in the starters. Grilled goat’s cheese, baked camembert or tomato and mozzarella made for tricky choices for cheese lovers, while the pescatarians had the option of smoked salmon with celeriac remoulade or pan-fried king scallops. The latter’s accompaniment of chorizo, pineapple, basil and lime salsa felt a step too far for this delicately flavoured seafood, so summer veg won the day again, this time in the form of an asparagus soup. Smooth, light and a good colour, it was served with a handsome chunky slice of chef’s homemade wholemeal bread and plenty unsalted butter, just the job while taking in the village green view from the conservatory style front facing dining room. Desserts rang the changes on ice-creams, sorbets and frozen yoghurt to have alongside fruity strawberry mousse or fresh fruit salad, with the sweet tooths catered for with chocolate brownie or vanilla cheesecake. Blue Murder cheese, especially with chunky chutney, was too intriguing to miss, but somehow not as dramatic as its name suggested, partly due to it and the other cheeses in the selection – brie and smoked applewood – being served too soon out of the fridge. Drinks-wise, there’s a reasonable number of fairly priced white, rose and red wines by the glass, 125, 175 or 250mls, as well as ports and dessert wines, and a more comprehensive wine list for bottles that is easy to navigate and has plenty to choose from.

A good night’s sleep, a walk round the green in morning sunshine, but still a breakfast of typical Scottish fare remained too much to contemplate. However, continental breakfast of home poached fruits and natural yoghurt with a croissant and a very good pot of tea hit the spot.  Perfect start to a day of listening to more music just seven miles along the road and an exploration of Paxton House’s extensive grounds and river banks.

Carol Main MBE is Director of Live Music Now Scotland and a good friend to Tom's Food! Thanks, Carol.