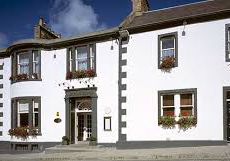 I don't know the Scottish Borders terribly well. I was pushed to remember much about my last visit to Melrose a number of years ago, apart from the culinary detail. After a bracing walk, we returned to town in search of sustenance. At 2.01 we entered a hotel (not this one). The sign said lunch served 12 - 2. The dining room was packed, many tables just on starters. A table for 2? No, you're too late. And thus it was that we arrived at a nearby pub and ordered stovies. Two groaning plates arrived each accompanied by half a jar of pickled beetroot - and chips. Not a combo I've ever had since, but at least these good people understood the notion of hospitality.

As do the Henderson family, who own this hotel and Burt's across the road. Someone asked me recently if they were related to the Henderson family of Whighams in Edinburgh. Not a clue. For all I know they may be late of Pablo Fanque's Fair, but they know their business. Far better, I suggest, than whoever was in charge of the signage between nearby Tweedbank Station and Melrose town centre. By coincidence we chose an anniversary of the Borders railway to make the jaunt. A nice easy train ride of less than an hour, and, in theory, a mile and a half walk thereafter. I think we clocked up about seven miles on the round trip. Going into town we found ourselves diverted via the River Tweed. Picturesque, but made us late for lunch. The way back was even worse. Then our hopes soared. Tweedbank ½ read a sign. 20 minutes later, the next one said Tweedbank ¾. My advice: take your own map, and avoid the Lewis Carroll directions on offer. 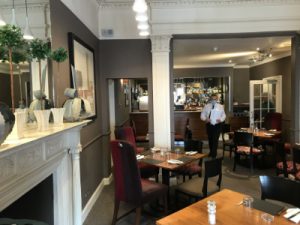 The game, however, is certainly worth the candle. I don't know how old the hotel is, but it is one of those quaint buildings on many levels and sub levels, not all as intended by the builders or architects. The dining room, on the other hand, is an elegant little space, and if it's hard to give an effusive welcome in a face mask, they did their best. (To be accurate, I think we were in the room which they call The Brasserie, but the menus seem to be the same for both.) There is something for everything. You can have soup and a sandwich for an astonishing £6.95. At the other end there is an attractive menu which they name 3-2-1, which offers three courses with a bottle of house wine, for £60 for 2 people. We went midway, with the a la carte which offered 8 each of starters and mains, 5 puds and cheese. A rustic pate was a well flavoured and chunky example, served at the correct temperature with chutney and toast. Fish cakes were well made, well seasoned and with plenty of fish, though they could perhaps done with significantly less of the (very tasty) curry sauce which drowned them slightly. A large piece of perfectly cooked cod was served on a good ragout of potato, chorizo and spinach, with various other ingredients resulting in a hearty plate of food. As was a classic combination of pork fillet, cabbage, mustard, pork belly and black pud (the latter two in croquette form), fondant potatoes and other good things. Wonderful stuff, but I couldn't finish it - and that doesn't happen often.

Not only is this a place to go should you happen to be in Melrose, it's certainly worth a trip - though preferably with an itinerary less convoluted than ours.