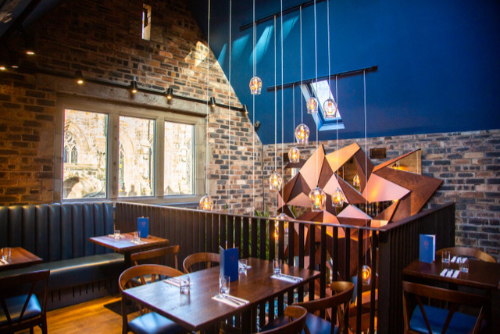 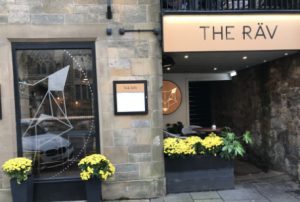 We've been coming to St Andrews for a short break most years for nearly quarter of a century. Not so long ago you were spoiled for choice of good quality, reasonably priced restaurants. While The Adamson remains a reliable go to, many of the others have either closed down or gone off the boil. That makes our discovery of The Räv a particular pleasure. We have to thank our chums B and C (formerly the GOS). Not only did they recommend it, but, back in the good old days of Tier 2, were able to lunch with us. Such times - before the Government discovered that allowing the consumption of alcohol was a cause of COVID.

I always have slight issues with restaurants with foreign names (unless, of course, they be French or Italian, in which case I can condescend to the ignorami who fail to pronounce them correctly). Sadly, I'm not familiar with any language which uses the umlaut (the two little dots over the a). Were this German, I'm told it would sound Rev.  I was rather hoping it would be Raiv, so I could right a rave review; however, it is Swedish, and is pronounced Rav, the Swedish word for fox, as depicted on their stylish sign. It's the brainchild of two alumni of the university, Alex and Gala, he English, she Russian. They were apparently taken by the similarities between Scotland and Scandinavia, and things developed from there. They opened their doors last year.

The place is across the road from St Salvator's in North Street. I read that the previous 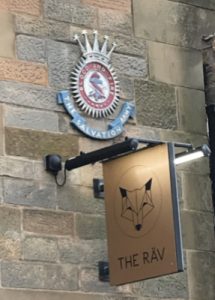 occupants were Innis & Gunn, though looking at the wall, it would appear that the Sally Ally got there first. (Hands up anyone who knew that the motto of the Salvation Army is Blood and Fire.) It's an unusual building, on two levels, the upper part having a loft like feel to it. I don't know who did the interior design, but stunning doesn't do justice to it. It would be worth while visiting for the décor alone. According to the website, Alex and Gala's motto (seeing as how we are into these today) is Eat, Drink and Play. Sounds good to me.

They installed two experienced chefs from Finland. The menu is an agreeable mish mash of cultures, with a range of cuisines from Scotland to Scandinavia to the Mediterranean. Scallops were plump Scottish specimens which probably didn't need the accompanying sweetcorn purée. Scandinavia was there in the shape of shrimp, salmon caviar and dill, served on toast. Nothing Scottish or Swedish about burrata and smoked figs, though aquavit was involved. I went for the intriguing sounding crispy duck egg brioche. This is technically quite fiddly, involving shelling a barely solid boiled egg, coating with a brioche crumb, then deep frying it sufficiently to cook the crumb but ensuring the yolk is still runny. Served with  mushrooms, creamed leeks, and prosciutto, it could have been a triumph if chef had remembered the seasoning.

Just in case you were in doubt as to the provenance of the meatballs served with lingonberries and pickled cucumber, they were advertised as Swedish. I have seen smaller cannonballs. And there were three of them. With mash. Incidentally, the perfect seasoning  of the meatballs themselves and the sublime buttery mash made me think the egg dish was just a blip. Venison with carrots, parsnips and mushrooms couldn't have been more Scottish: and the Med was represented by a colourful plate of sea bass with lemon, fennel, olives and tomatoes.

Service was unhurried and amiable. While some might interpret that as "slow", it was pretty obvious that we were catching up with old friends. I'm not certain if we were being waited upon by Alex himself, but I'm fairly sure that the speed of service reflected a correct perception of our wishes and wasn't in any way negligent.

Sadly the place was almost empty when we visited, and it will now have to shut at 6 and sell no alcohol. How well a fledgling business such as The Räv is placed to survive this storm I don't know. Many of you will have heard my rants about the treatment of the restaurant industry, so I won't repeat them here. My hopes and best wishes are with all restaurant owners at this time, but some of the most heartfelt are with Alex and Gala. If St Andrews were to lose a place of this quality, we would all be the poorer.