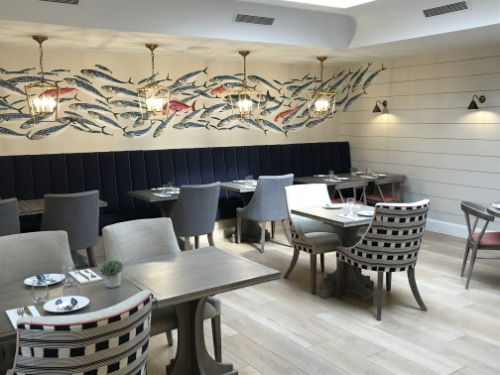 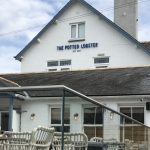 I don't usually include quite so many pictures, but this is the prettiest restaurant you have ever seen. Only a year old, newly born sister to the eponymously named eatery in Bamburgh, Northumberland, it is beyond lovely, the gleaming whitewashed walls and elegant terrace greeting you as you drive into the centre of a little seaside resort on the Lleyn Peninsula. 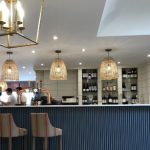 I have a letter here addressed to the designer. A testimonial, perhaps, or intimation of a prize for interior decor. It's from a company called Sue, Grabbit & Runne. Let's summarise. We act on behalf of Mrs LJ of Scotland...while visiting she hit her head on a sharp edged light fitting en route to her table, about 5 feet off the ground...sustained painful head injuries...hold you liable in damages etc, etc. 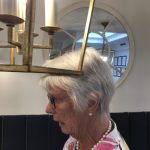 L had bashed her bonce most painfully on the angle of a solid metal light fitting. Oh yes, said the people at the next table, we did that too. None of the (otherwise lovely) waitresses turned a hair as it was obviously such a commonplace occurrence. There is more to dining room design than aesthetics. A usual problem is a table which you can't sit at comfortably (a minus mark there too). Mr and Mrs Lobster, are you listening? Otherwise someone with a split forehead will sue for real.

I got to hear about The Potted Lobster from a neighbour who has a second home in Northumberland. He is, I think, a regular in Bamburgh, which is 325 miles from Abersoch. No one we spoke to could tell us much about the connection. Not entirely handy if you need to borrow half a dozen eggs. My local cobbler in Edinburgh has two branches in Stonehaven, which I thought was weird; however, at 112 miles, that's a hop and a skip by comparison. (By the way, if you're contemplating moving to Abersoch, be aware that a beach hut, approximately 13 feet by 10, sans water or power, is currently on the market for offers over £175,000.)

But to lunch. First aid having been declined by the victim, I enquired whether a glass of fizz might ease the pain. Veuve Cliquot at £12 a glass went a good way to speeding recovery. Sundry young ladies went to and fro through the dining room, each intent on our welfare. They all, I noted, seemed to be small enough to nip under the deadly lampshades - and those who know us are aware we're not giants. 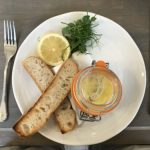 As you might guess from the title, it's a fish restaurant.  A sensibly compact menu comprised 5 starters and 8 mains, including steak for the carnivores and one in each section for the veggies. It seemed foolish to avoid the eponymous starter, which came in a generous sized Kilner jar with freshly toasted focaccia. It wasn't quite what I was expecting. Potted shrimps, for example are cooked in seasoned clarified butter. Here, the butter was smeared on top, and went very well with the bread. Probably a good idea to let the chunks of local lobster and crab to speak for themselves along with the brown shrimp.

I defy any pescatarian to read this menu without drooling. Herb crusted cod loin, fondant potato, smoked pancetta, vermouth sauce. Lemon sole, crab croquette, samphire, brown shrimp, wilted spinach, lemon butter. To quote Paul McCartney, these are words which go together well. I'm happy to say that in the hands of chef, whoever he or she may be, the food is equally harmonious. I actually thought I had been given a whole sole. It turned out to be just a fillet, but was packed so full of other goodies that I really didn't need the (so so) chips ordered as a side. Neither did L, who had been delivered the largest chunk of (very good) fondant potato I've seen in many a year.

I see that both places (plus a good handful of other businesses) are owned by an energetic 29 year old by the name of Thomas Leslie. Good luck to you, Tom. Thanks for a great lunch - but get a risk assessment done on your Welsh dining room before it ends in tears.