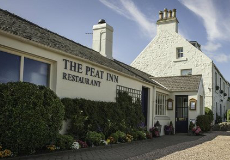 Menu of the Day

There has been a coaching inn on this site since at least the 18th century. The inn came first - the village was named after it. We know not how high a standard of hospitality patrons might expect, many probably pilgrims heading for St Andrews. You would stop at a coaching inn for shelter and refreshment, obviously, but your stop would be dictated as much by your horses as by your own needs. If you were making a long journey, and were in something of a hurry, fresh horses, provided by the establishment, would allow you to move on quickly. Their availability would depend on the status of the tavern. Look at OS maps of Scotland. You will find numerous places called Chance Inn. Go there looking for fresh steeds: you might be lucky, you might not, hence the name.

Anyway our own horsepower brought us here for an overnight stop and dinner as a treat for the trouble and strife. (Yes, I am aware that I spoil that woman, no need to tell me.) It was like arriving at a friend's house. No forms to fill in, no credit card to be scanned. Welcome.

Dinner, obviously, was the main object of the exercise. Owner Geoffrey Smeddle took over the reins  from the talented, eccentric David Wilson in 2006. A Michelin star followed soon thereafter. These things bring prestige, but also pressure. The inspector's hat is clamped on ever more tightly, and more detailed scrutiny awaits. 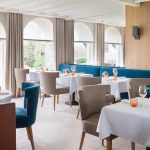 Inside seems far more modern than you would expect. An aperitif was taken in a cheerful room with modern oil paintings and a log fire which was too well mannered to roar, but was certainly shouting of the promise of what was to come. There is a choice of a set three course menu of the day, a tasting menu or a la carte.

I had popped in earlier to look at the wine list, and had met those "who were going to be your servers this evening." (Only kidding, they didn't really say that.) But I got the chance to meet sommelier Judith, from Elie down the road, smiley Nicolas from somewhere in France, and even smilier Ewan, who bounced a lot. They did us proud.

The a la carte was small but perfectly formed, four each of starters, mains and puds. Me pass by a pigeon on a menu? A rare event, but in this case the bird was bagged by my HSC (Horribly Spoiled Companion). It was more alarmingly red than I would dare serve it. That's why Mr Smeddle has a Michelin star and I don't. There was black pudding with it and, apparently, sauerkraut purée and Savoy cabbage with bone marrow sauce. In the hands of a master, ancillary ingredients, like supporting actors, may not contribute hugely by themselves but just assist in the overall glory of the end product. Quails eggs were a variation of a Scotch egg, in a potato crust. They were served in a sumptuous Jerusalem veloute with shaved truffle. A brilliant dish, the one minor disappointment being that the eggs were decidedly hard. 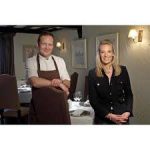 Celeriac, apple and walnut sounds good as a combination at any time. Put them together in a raviolo with two types of mushroom, and you have a triumph, any one mouthful giving hints of slightly bitter, then sweet, then earthy. Mr Smeddle's main courses are voyages of discovery. There were mushroom bon bons, baby Romesco, and a leek veloute adapted for the non cream eater. Even more exploratory skills were needed for  a plate of seared rump of beef. Sounds simple, doesn't it?  But investigate beyond the perfect pink meat and what do you find? The advertised salsify, yes. Here a lardon, there a baby onion, on the left some parsnip purée. A tiny potato cake surprises you, then, hiding below the beef, creamed leeks. And, of course a sticky reduction of a red wine sauce.

Ooh-ing, aaah-ing and finishing the last of an expensive, but not eye-wateringly so, bottle of red, we should have got out while we were ahead. In which case we would have been singing the praise of Peat Inn unreservedly, like a chorus of heavenly linties. We normally avoid dessert, but got carried away. Unless there is something wrong with you, it's not pleasant to watch train wrecks, car crashes or wheels coming off wagons. The non cream eater had been catered for with a special version of the Menu of the Day. We ordered the pud from that and two spoons. Sounded promising. Chocolate brownie with poached pears and pear sorbet. I should say that in each bedroom, there are a few brownies to welcome guests. When you make a tray of these and overlook them slightly, you will often cut off the end bit. You might feed it to the birds - you wouldn't expect it to leave a Michelin starred kitchen. The pears had no sweetness whatever, and the sorbet, (pear on the menu, caramel according to the waiter) had ice crystals that threatened serious internal damage. It also had an unpleasant flavour. I probably marked the first 4 plates at 9/10. This would have struggled to get to a 3. Sadly that brings down the overall score.

But the next morning, the sun shone as it does on the righteous, (my brother and me), an excellent breakfast was consumed, and the world, including memories of dinner, was a better place. The food here is fabulous - but you know the dish that will stick most in the memory.