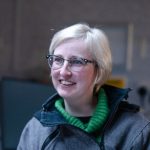 Narcissism in a professional kitchen? Whoever could imagine such a thing? No point in mentioning names, but anyone with more than a passing interest in food has encountered, either in real life or on screen, a chef who struggles to squeeze his ego through his own restaurant door. Similarly there are many kitchens where there is much more to be found simmering than just sauces in pans. This is the background to The Narcissistic Fish, a new short opera to be premiered by Scottish Opera at 19.00 tomorrow (Thursday June 18). It is made specifically for film and is set in a professional kitchen.

Yes, you have a question? Does it go along the lines of, what on earth is an opera review doing in a food column? And is the supplementary, what the hell does the likes of you know about music anyway? Fair points, both; however, I was alerted to this by a real music critic, Carol Main, and was fascinated to learn how, if at all, a kitchen setting could be used in an opera. I also had a recent comment from a reader accusing me of a fear of innovation because of my refusal to include wine in my restaurant reviews. Ha! Show me another food blogger whose site includes a preview of an opera, otherwise stick that in your wine glass and sniff it. 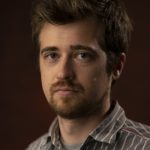 Anyway, my thanks to Emily Henderson, Samuel Bordoli and Antonia Bain of Scottish Opera. They are respectively Press Manager, Composer in Residence and In-house Filmmaker. The piece itself was created by Bordoli with Jenni Fagan who wrote the libretto. The press release says it was written in Scots. It’s probably more accurate to say it’s written in the vernacular of Leith, where the restaurant is set. It’s certainly the only opera I’ve ever seen which features the word fud. (Irvine Welsh does not appear in the credits.) I was able to interview both Samuel and Antonia. Fagan declined to be interviewed, saying that she would answer written questions. I declined to provide them: a professional wordsmith ought to know that’s not the best way to impart information.

The process itself was new to all participants. Samuel told me that it was probably made in much the same way that MGM did their famous musicals. Story boards were meticulously created, planning each shot. The singers prerecorded the work, then lip synched as they filmed. Don’t be like me and assume that means miming – apparently the film crew were more than a little taken aback by three professional singers giving it laldy in a confined film set. Antonia tells me that once the songs were recorded she was unable to do any meaningful editing. The singers used something called a click track – like a continuous metronome – which was engaged throughout the shooting. Thereafter Samuel went back to work, adding background music and noises. 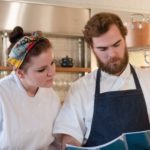 What intrigued me from the outset, of course, was the kitchen setting and how much the actors would have to get into character other than wearing chef’s whites. There is a cast of three. Brothers Angus and Kai are played by baritones Arthur Bruce and Mark Nathan. They work alongside Belle (soprano Charlie Drummond). I promised I wouldn’t give away any of the plot. I’ll simply paraphrase the press release, which tells us that the work touches on the themes of narcissism and gender bias. We’re also told that class comes into it: to be fair, that didn’t register much with me. Equally, I’m not qualified to give an adequate critique of the music. 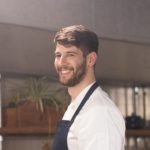 So, to the cheffing. Antonia had worked in a kitchen (as had Charlie Drummond). That gave her the idea for the noise and the tension. There was a food stylist, Claire Irwin, and the piece was filmed at Parkhouse Business Park. This is now a film location, but the set itself had previously been a commercial kitchen. It looks reasonably authentic (apart from the gurgle jug).  The kitchen noises themselves were created at home by Samuel. We start with a mezzaluna, operated by invisible hands, making short work of a pile of herbs. 8/10. A large fish is filleted – quite a reasonable effort, though leaving a bit too much flesh on the bones, I would suggest. 7/10. A whole fish sizzling looks as though it might have been edible at the end. 6/10. The accompanying potatoes being chopped? Probably an actor involved, too slow for a pro. 4/10. And finally, Angus making incisions into fish pre frying? Well, definitely more Swedish chef than Savoy kitchen. 0/10.

But who cares? The last action was as much for dramatic effect as for realism. Everyone involved seems to have enjoyed the process. Both Antonia and Samuel tell me that they have both learned new techniques which they will definitely use in future projects. And On The Side has even more useless information, about opera and film making, to stick away in the memory banks. It’s unlike anything I’ve ever seen before. Watch for yourselves. It’s only 12 minutes and there is no charge. It will stay on the website for some time.

Watch The Narcissistic Fish from Scottish Opera online from 19.00 on Thursday 18 June at https://www.scottishopera.org.uk/

All photographs are reproduced by kind permission of Scottish Opera