(the email address is not a typo - there is no .uk) 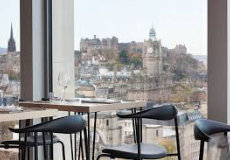 There is an elegant symmetry to this, is there not? This is the latest venture by Dale Mailley and Edward Murray, of Gardener’s Cottage fame. The aforesaid building was designed by William Henry Playfair, workaholic genius who springboarded on the legacy of Robert Adam and made the New Town of Edinburgh (currently in its 252nd year – we age well up here) one of the world’s truly great cities.

Playfair also designed many of the buildings and monuments of Calton Hill, including the next door observatory. There is also a monument to Playfair: ah, there our symmetry ends, as it is to his uncle John, the astronomer. No matter. While Calton Hill is unmissable, it was also becoming a little run down. No more. An organisation called Collective has redeveloped the observatory as, I think, an arts centre. There has also been the first piece of new building on the hill in nearly two centuries. In this elegant little stone and glass box, overhanging the north side, you find the object of today’s quest.

The interior is simple: the views, even on a grey day, stunning. In fact, I do fear for them when summer comes. I saw no sign of blinds. An oven is essential for a kitchen, but not for dining in. But maybe they have air con. I’m sure they’ve thought about it.

Because someone has surely thought a lot about the food. And I would suggest that that person is up there with my hero William Henry P on the genius stakes. For this may just be the best food to be had in Edinburgh.

We lunched with D & J (not to be confused with our regular companions J & D). We discovered, to our astonishment, that they had never been atop the Calton Hill. I went into full tour guide mode: L rolled her eyes. It is possible that I was being a tad garrulous. If so, that may have rubbed off on the pleasant young man who took our coats, and engaged us in some welcome chat. After about five minutes, I had to ask if we might possibly be seated. There is a set lunch. 4 courses (if you count the sourdough and whipped butter as a course) for £33. The a la carte is set out in the same format. There were some intriguing choices in what I would refer to as the “snack” section, with oysters also included. J was very happy with the set menu. Ah, said waiter number two. If one person chooses that, the whole table has to have it. WHAT? I can see the point if there is a seven course tasting menu, but it has the same structure and number of courses as the ALC. I made a fuss and matters were resolved. Blips can be readily forgiven when food of this quality follows.

Good tapenade and fantastic charcuterie brought smiles. We had no idea what to expect from a plate described as Crab, Tapioca, Scurvy Grass. The crab was served in a cracker made of tapioca and squid ink, with mayonnaise flavoured with cochlearia, as scurvy grass will be known to you. (It’s a member of the mustard family, eaten by sailors to ward off scurvy, if they couldn’t get hold of limes).

On to starters proper. Who thinks up these combos? Hare, Consommé, Leek. Mad you may say – well, it is March - but fabulous. Pigeon, Cocoa, Bramble? Come oan! Bizarre, but lovely and perfectly matched, just like me and the current Mrs Johnston. The trumpets, however, must be saved for the more prosaic sounding egg yolk raviolo with Tunworth cheese. Yeah, I make my pasta with egg yolks too. What’s special here? OMG. A plate of wondrous, creamy, lightly cheesy mousse arrived, covering the raviolo. Spear it and an orange yolk appeared, streaming together with the cream and the cheese. As technically brilliant as it was  wondrous. I’ll be surprised if I eat a better dish this year.

For mains we had mallard and pollock and boar, and an awful lot of ooh-ing and aah-ing. Which continued into desserts of Gin & Tonic, Citrus, Shortbread/Alexander, Juniper Apple, Caramel and Rhubarb, Ginger, Camomile. You will not be surprised to read that these were all masterworks.

Food really doesn’t get better than this. Iron out the wee service wrinkles, and this could be very close to a perfect score.