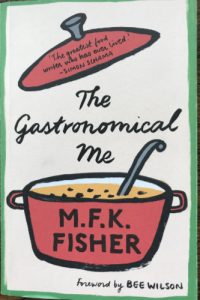 I have to say that the readership numbers for the book reviews in this column have been a bit on the slack side. This surprised me a little. If you are interested enough to read this blog, I thought you might appreciate being directed to people who really can write, as opposed to my scribblings to which you are subjected thrice weekly. I make no apology for continuing though, especially not in the case of this particular writer.

MFK Fisher was born in Michigan in 1908 and spent much of her 84 years producing food and prose of the highest quality. Over the years I read her name in the footnotes of numerous authors, but I had never seen any of her work in print. Then three years ago in West Linton I came upon The Gastronomical Me. That wonderful independent publisher and bookseller James Daunt rediscovered this work and brought it back to light, nearly 75 years after it first delighted gastrophiles. That was also my introduction to Derek Linton of Linton Books, bibliophile, Wagner expert and occasional pantomime dame. Derek sourced a dozen or so other Fishers for me. Her writings were new to him as well.  Thereafter we  enthused over her books together over a lunch or two.  Our next meal out was scheduled for the week after he went to the great stage in the sky.

Reading any of Fisher's work makes you hungry. As John Updike put it, M F K Fisher is a poet of the appetites ... pages pour by that would make a proof-reader's mouth water. Don't be put off by the title, or by the chapter headings, many of which are entitled The Measure of My Powers (it's a quotation). The book is an autobiography covering the years from 1912 to 1941. The family moved to California where her father was a newspaper owner. In 1929 she took her first trip to France. For many of us that first exposure to French cuisine is an eye opener, probably even more so for someone based in 1920s California.

Fisher, however, had a fascination for food and, it appears, a pretty decent palate, from a young age. Early childhood memories included licking the skimmings from her Grandmother's strawberry jam, or delighting in the food of Ora, their respectable grey haired cook.  On one of her Sundays off, instead of going to church, Ora expertly dismembered her own mother then neatly slit her own wrists and throat. Grandmother had never approved of Ora.  While Granny was much loved, her disdain for food seemed to provide a bit of a damper on family meals. Following her death Fisher recalls, we could have mayonnaise, rich yellow with eggs and oil, instead of the boiled dressing Grandmother's despotic bowels and stern palate called for. 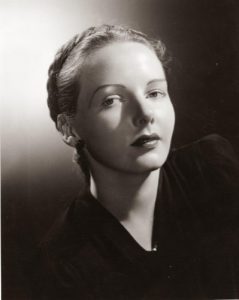 Viewed objectively, much of Fisher's life between 1929 and 1941 was tragic. A spell living in France with her first husband saw the marriage break down; subsequent travels with Chexbres, her next partner, saw him contract an incurable disease and take his own life because he could no longer endure the pain. These matters are  dealt with in a documentary rather than an emotional way, and everything in the book takes second place to her descriptions of food. The first joys of the finest Burgundian fare at Les Trois Faisans in Dijon; simple suppers of sausage, bread and beer in Strasbourg; a farewell lunch of bouillabaisse at the Old Port in Marseille.

We share her sojourn in Switzerland, where dinner guests might include an old Swiss judge as important as God to himself and his small community, or a pompous hotelier who would refuse to believe that Fisher herself had made the stew for dinner, she being American.

The book ends evocatively in Mexico, a stay with her brother and their friendship with a young Mexican musician. MFK (as I now know her) describes it as one of those watershed moments which, whether or not you realise it, signals a transition into the next phase of life.

This is not good writing, it's great writing. This is not just food writing. In the words of W H Auden, I do not know of anyone in the United States who writes better prose. I first read this book three years ago. I had to dip into it again for this review. As with reviewed restaurants, I seldom go back - indeed rereading is a rarity for me. But guess what's now back on my bedside table. Like being sucked back to that three star place you swore would be one off visit.

If you read but one food book this year, make it this one.

I predicted some time ago that lockdown would see some places shutting never to reopen. Not the hardest forecast to make, but sad to see it come true. The problems of chains are well documented. The futures of many high street names such as Cafe Rouge, Frankie & Benny, Las Iguanas, Byron and Pizza Express are all uncertain. Now we can be snobby about these places if we like - with the exception of the latter I don't think I've ever visited any of them - but think of the numerous people who may lose their jobs, and the effect on communities of lost rates income and having empty boarded up buildings in prominent locations.

Here in Edinburgh, we are losing two well known and well loved institutions.

Hendersons, the vegetarian restaurant, founded as long ago as 1962, has gone into liquidation.

L'Escargot Blanc and Wine Bar in Queensferry Street, a favourite of mine, will not reopen. Fred and Betty Berkmiller tell me that they will be concentrating their attention on L'Escargot Bleu in Broughton Street.