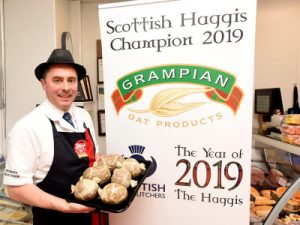 One of the many benefits for me since I launched the On The Side column has been the chance to meet so many new people in the food industry. I can't say that about today's food hero, Tom Courts. Why not? Because I've known him since he was a very young man. And to make it worse I, as we Scots are fond of saying, kent (and ken) his faither. Seeing his youthful appearance, you may be astonished to learn that Tom, junior, has just celebrated his 50th birthday.

Tom's dad, also Tom, set up his own butchery business in 1967. If you are imagining some typical, like father like son business, think again. Tom, junior, obtained an accountancy degree then spent time in Fife police, where he rose through the ranks to become an important figure in the fraud squad. He didn't come into the family business until 2003, but it was immediately clear that he had his father's combination of entrepreneurship and hard graft. Dad had built up a mini empire of shops before doing a work life reassessment. Having scaled down, he too had a shop in Burntisland, across the road from today's haggis champion. Then there was a unit in Cowdenbeath which, under Tom junior's leadership, soared. Dad had allegedly retired. His idea of taking it easy was to come in at 6 to make the prize winnning potted hough. More on prizes anon.

The current shop opened in 2016, when Tom spotted an opportunity to take over what he saw as a sleeping giant. The retiring butcher was coming in at 9 in the morning - Tom is in the shop at 5. Targets in a 5 year plan were hit in 6 months. In 2017 he won the Best New Butchery Business Award. My guess is that his mantelpiece must be overflowing. Prizes have been won for sausage rolls (including a World Championship), potted hough, beef and pork sausages and Scotch pies. In 2015 his haggis came close, winning the reserve prize.

This competition, I am told, is the Big One, the Holy Grail. In May of last year he cracked it, being crowned Scottish Haggis Champion at the Scottish Meat Trade Fair in Perth. What makes his haggis so special? Well, On The Side can exclusively reveal...  Don't be daft! Of course we can't. The recipe is, of course, secret, known only to Tom and to one other. As a little local difficulty has meant that there is no contest this year Tom continues to reign. 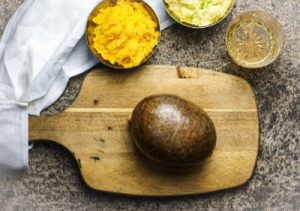 There are few foods more quintessentially Scottish, and Tom is proud of that. His haggis is made using traditional casings. He has no idea whether that improves the flavour - it just seems the right thing to do. Do you make vegetarian haggis, I ask? He sighs. You can make something very good to eat with vegetables and spices cooked in a plastic skin, he replies, but don't call it haggis. There is no such thing as vegetarian haggis.

What will the championship win mean for the business? Since opening in Burntisland, Tom has already seen his market expand 10 fold - and that was even before the award. He is about to take over a separate industrial unit to boost production, and two new websites are under construction. He is eyeing markets down south, with some major retailers expressing an interest.

If you are one of those who is becoming depressed by the state of the average Scottish high street, take a trip to Burntisland. While it is showing some inevitable signs of malaise as they all are, there are some top quality niche retailers. Within about 10 yards of each other, you'll find Macauley's Fruit and Veg Merchant, and C Sinclair Fresh Fish Merchants, both as good as anything to be found in any city. Then cross the road to Tom's shop for your haggis, and a whole range of wonderful butchery produce. I've sampled the haggis myself and can confirm that the World Championship was well earned.