As a solicitor I have in my time engaged in very many aspects of legal practice. The one that gave me least satisfaction was conveyancing, transferring title to heritable property. There would, however, be the the occasional nugget of interest; an odd title condition, say, or some weird and wonderful names. Who knew, for example, that somewhere in north east Fife there is a property named Dalek House?

Some proprietors would seize on old titles and carry out research: most, however, lacked the time or interest. Lindores Farm, on the outskirts of Newburgh in Fife, was bought by Drew McKenzie Smith's great grandfather in 1913. It contained the ruins of Lindores Abbey, sacked by order of John Knox in the 16th century. Three quarters of a century would pass before the family learned its astonishing secret. 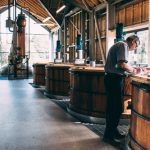 In the year 2000 an arty looking sort of chap came to the farm and asked Drew's dad if he could inspect the abbey remains. The man was Michael Jackson, celebrated whisky and beer expert. In his subsequent book, Scotland and its Whiskies, he described his visit as a pilgrimage, paying tribute to the memory of John Cor. Eh?

For the first time the family learned that the earliest written record of the making of whisky related to Lindores, going back as far as 1494, when the king, James IV, had his court at nearby Falkland Palace. The Exchequer Roll (the palace accounts) for that year included a record of the following payment-

To Brother John Cor, by order of the King, to make aqua vitae VIII bolls of malt.

A boll was a measure, being 4 firlots or 16 pecks. None the wiser? Well, historians tell us this would be enough to make 350 litres of spirit, aqua vitae, the water of life, call it what you will. Now an ordinary person would have said, very interesting, what's for dinner, or the like. Once you meet Drew and Helen McKenzie Smith and their family you realise at once that these are most certainly not ordinary people. 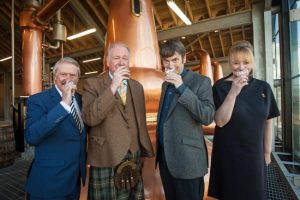 In the elegant bar which is part of the distillery complex, Drew explained how the project came to fruition. He became inspired by the idea of creating a distillery on what has claim to be the spiritual home of Scotch whisky. While there was much enthusiasm, the 2008 recession sent the idea on to the back burner. Thankfully Drew and Helen were persuaded to revisit the plans and the building was completed in 2017. Space doesn't permit the full story to be told in this column, but click here for more of the history which you'll find in their terrific website.

I asked about the pitfalls they encountered. Drew paid tribute to Fife Council and Business Gateway Fife, who were both supportive. He says his heart sank a little when he was forced to engage an archaeologist; however, it proved to be of huge benefit, when the excavation uncovered a still from medieval times.

The first spirit came out of the (new) stills on 21 December 2017. This means that on the 20th of next month it will be entitled to the name whisky. While many new distilleries (and there seem to be an awful lot of them) have been generating income by making gin, for Drew and Helen, there was only one option. Their Aqua Vitae has been winning awards from the outset, including the 2020 Gold Medal in the SIP Awards for the Botanical Category, and a 2 Star Outstanding Award at the Great Taste Awards 2019, the ‘Oscars’ of the food world and the ‘epicurean equivalent of the Booker prize’. In keeping with their ethos, all ingredients are natural and, where possible, local. The barley comes from Fife, and the botanicals reflect what was available locally, including Sweet Cicely and Douglas Fir. Drew admits that they had to spread the net a little more widely to improve the recipe. It was known that the monks of Lindores traded with Flanders where dried fruits would have been available. These are now part of the flavour which has mixologists up and down the country raving about it, and sees it on the shelves of Fortnum & Mason.

What next? Annual production is up to 250,000 litres. The recently released New Make Spirit is also winning prizes, which bodes well for the future. There are plans to plant 600 fruit trees, not just as a nod to the Lindores orchards of old, but perhaps to cider production. To ensure the legacy is preserved, the 1494 Society has been set up, with significant benefits for members. At £500, the ultimate gift for a whisky lover. If that's beyond your budget there is a whole range of gifts and stocking fillers starting at just £3.50.

Distillery tours are on hold now because of COVID, but I would urge you to find out more about this remarkable venture and the amazing family behind it. Check out the website now and get up there for a tour as soon as you can. And in the meantime, here are  a couple of cocktails to take the edge off your drouth. Half fill a highball glass with ice. Pour over the Aqua Vitae, top with ginger ale and garnish with the orange slice. 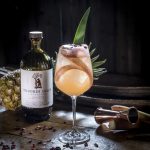 Mix together over ice and serve. Can make one individual cocktail or mix together in a punch bowl for a party. Use Lindores Whisky Stones to prevent melting ice diluting the drink.