Farms are traditionally handed down through the generations, so what is unusual to learn that Branxholm Braes, just outside Hawick, is now being run by a third generation of the Murray family? Well, a couple of things. The first is the obvious one, farmers still being predominantly male. More on that later. But if, fifteen years ago you had told Rachel Murray that she would be looking after a 400 acre farm with 420 sheep, 60 head of cattle and 6 horses, she would have laughed at you. 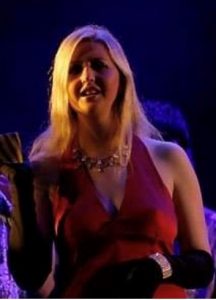 Why? Because, after studying drama at Liverpool and Worcester, Rachel spent ten years as a working actor. Perhaps the BAFTAs didn't come her way, but she was supporting herself and putting some money by, which is more than can be said for many in that most precarious of professions. The picture shows her on stage at the London Palladium. So why the career change?

I always used to come home to help with the lambing, she explained. Then one year my Mum and Dad planned a holiday to California, and I offered to hold the fort. Because of family circumstances I stayed on a little longer. Next thing I knew, a year had passed, I'd bought a horse and a sheep dog, and I'm still here.

Employing the worst standards of journalism, I had written the title to this article before Rachel and I had our chat. I hadn't realised that there were so many cattle on the farm. Perhaps there's another feature to be done, but for now we're concentrating on the sheep. 422 of them to be precise. Lambing will start next month. All being well, approximately 640 lambs will be born in a chaotic six week period. 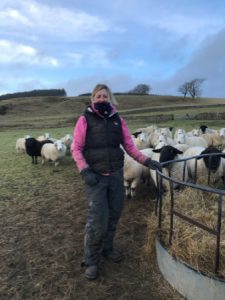 One of Rachel's earliest memories is of hugging and feeding a pet lamb. Wait a minute - aren't farmers supposed to be too hard nosed to have such things as pet animals?  The reply is brief. I don't think you should be a farmer unless you DO keep pets. And when I ask her about the low points of the job, expecting complaints about January snow drifts, I'm taken by surprise by the response. The bit she hates most is seeing animals she has worked with being taken to be sold. Astonishingly, Rachel tells me that she knows most of her flock by sight.

There are so many things that the rest of us just don't have to think about. It's a closed herd to prevent disease. New tups (rams) are bought in every other year, but some are retained. Care has to be taken to avoid interbreeding. A typical day involves doing the rounds to make sure everything is upright, fed and watered. And does that apply to the parents as well, I asked? (Only joking, Ruth and Philip.)

Late summer and early autumn are a favourite time. The first lambs go to market at the end of August (which is why, every year, Tom Cooks! tells you to support Scottish farmers by eating lamb then, not at Easter). On the Monday nearest to October 10 there are the Cheviot tup sales and, in normal years there are agricultural shows. I asked Rachel about being a woman in a man's world. She is quite candid that with many men there is what she describes as an ill disguised edge. And with a not at all disguised grin, Rachel tells me that quite a few 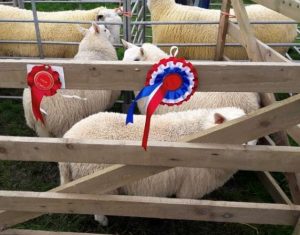 noses were put out of joint when she started to win prizes at shows.

I ask her about Brexit. Like many she is concerned about future trade deals. We have to realise we have the best meat in the world, she says. It would be a disaster if we start importing chlorinated chicken and hormone injected beef. The farming industry is still in a post Brexit transition, and it is likely that future subsidies will come with "green strings", ie a requirement to commit to environmental improvements. Rachel is sanguine about that. Some 3000 trees have been planted at the Braes, but that does come at a cost and isn't something you can take to market.

Finally, as this is a food blog, I have it on my list of questions to ask about her favourite lamb dish. I never eat the stuff, she says. Give me a well cooked fillet steak any day. 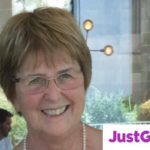 Rachel's mum Ruth is one of many Britons who has had a first COVID Jab. Like many of us she thought it would be good to help those in other countries who don't yet have any vaccine. According to today's paper there are 130 (yes one hundred and thirty) countries without a single vaccination. Unlike most of us, Ruth decided to do something about it. She has set up a Just Giving page to raise funds for COVAX, overseen by the World Health Organisation. If you have had a jab, will you contribute the cost of that to help others? Click here to go obtain more information and make a donation.