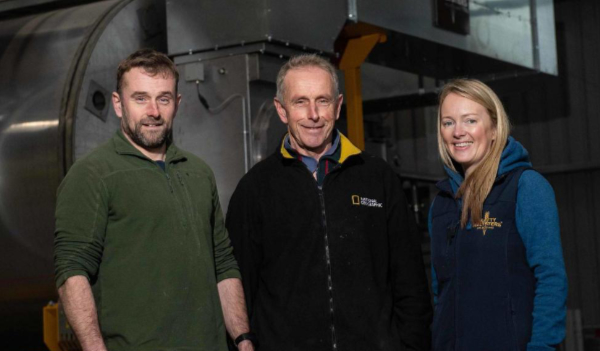 On a gloriously sunny November day I am on Demperston Farm, just outside Auchtermuchty in the Kingdom of Fife. The view is idyllic, looking south over the Lomond Hills. Alison Milne, however, is in reflective mode. As a society, we have never been more disconnected from our food and how it's produced, she says. On her behalf, allow me to pose a question. Over the next few weeks (and indeed throughout the year) a large number of us may propose a toast with a beer or with a wee, or not so wee, dram. Tell me the ingredients of what you're drinking. 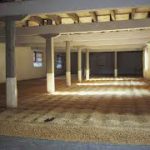 Now you are a foodie lot, so that wasn't so hard. Barley, I heard you say, water obviously, yeast, and many of you remembered hops. But how many of you mentioned malt? And how many know what malt actually is? Did you have visions of a large malting house with grain spread over a vast floor, turned over with a shovel or rake? OK, admit it. You haven't a clue. The quaint traditional method shown left is still used by a few specialist distilleries, but, by and large, it died out about 50 years ago. Even here at the home of the Crafty Maltsters, it is done by machinery, the epicentre of which is the gleaming GKV, the Germinating Kilning Vessel. This was imported from Italy in 2018, but more of that later. 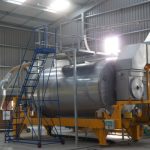 Now, as any fule kno (well, any fool like me who spent a few hours online before meeting Alison), to produce malt you take barley which has been dried to the appropriate moisture percentage. (You can malt any grain, but barley is the largest cereal crop in Scotland, some 59% of the national output.) What you are looking to do is to encourage the grains to start germinating (or chitting, to use the technical term) to break down the starches. You begin this by steeping them three times in water. Now the first problem (and this is my favourite piece of trivia of 2020) is that barley goes dormant for a period of between six weeks and three months. If you steep sleeping grain, it drowns: and the steeping period differs between still drowsy barley, and that which is wide awake.  Toasting the grains stops the germinating process, and the character of the finished malt can be controlled at that stage by the temperature. Crunch the end product and it tastes of Maltesers. Broadly there are two types of malt, the more neutral base malt, and the so called specialty malt primarily created to produce a particular type of beer. The most extreme example of this is the highly toasted stuff used for very dark beers such as porter or Guinness.

The Milnes produce three types, a lager malt, Demperston Distilling Malt and Grandpop's Pale Ale Malt. They are the sixth generation of their family to farm here. Alison's husband Daniel is Chief Maltster, his dad Norman is Chief Engineer, and Alison cheerfully describes herself as Chief of Everything Else. Hers is an interesting background. From farming stock herself, she served for a number of years as a representative for NFUS (National Farmers Union Scotland) and is currently a board member of Scotland Food & Drink. Most farmers sell their barley in the so called "futures" market - a black art which makes doing the Lottery look like a sound investment - where the prices, bizarrely, are linked to wheat price indices. With so much of the malt market being dominated by Big Business, the Milnes realised that in some years their barley - once regarded as the cash cow for Scotland's growers - was being sold for less than it cost them to produce.

That's when the research into malting began. Ironically, the brewing scene in the USA, once home to the most tasteless brews known to man, was an inspiration. Craft brewers were becoming more aware of the provenance of their ingredients. Experiments were beginning with other types of barley, different from those on the approved list issued by the AHDB (Agriculture and Horticultural Development Board). The Milnes worked closely with the James Hutton Institute, a research organisation which in turn is developing the International Barley Hub.

After three years they took the plunge. State of the art equipment was imported from Italy. Unfortunately, it arrived in flat pack form. Not only was there no assistance to install it, there were no instructions. Alison credits her father-in-law's engineering genius (plus some interesting manoeuvres involving multiple tractors) for getting things up and running. Six "new" varieties of barley were trialled. These have been narrowed down to four, including two native species which have not been grown commercially for over two centuries.

This is their first year of experimenting with heritage barleys, but the product is already attracting rave reviews from the craft beer industry. Some distillers are expressing an interest. Alison is keen to shake off the industry perception that malt is just malt.

The Milnes are passionate about family farming. Over six generations their ancestors had to change and evolve. In some ways, Alison says, they are looking back in time, not only to the types of barley used, but to better methods of husbandry, to caring for the soil and observing the subtle differences which can be made to their malt. The next decade will see the brand being developed, and an opportunity extended to other growers to be part of this movement. And you, dear readers, can tell your children that you first read of the enterprising Milnes in Tom's Food! Raise many a glass over December, but don't forget a toast to Alison, Daniel and Norman.

This is the last On The Side column of 2020. The next two Wednesdays will feature the review of the year. They're normally published on Tom Eats! day, but you may have better things to do on Christmas Day.