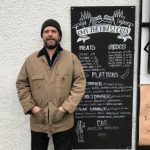 It's midday on a sunny Sunday, and I'm here for my lesson at The Smiddy Night School in Powderhall. Now I know what you're thinking. This is just one example of the flexibility and adaptability of the amazing business run by Cameron Bell, wife Emma Roeder and their team from converted blacksmith's premises. It celebrates its first birthday this month. You'll find them in a small industrial estate tucked away at the end of Dunedin Street, off Beaverhall Road. Follow your nose and the glorious wafting aroma of cooked beef and pork.

Cameron spent the first part of his career as a high powered IT consultant. Becoming disillusioned with the business he saw the pandemic as an opportunity. Firstly he and Emma set up Roeder & Bell, selling gourmet food parcels. At the same time, Cameron started the arduous craft of learning to become a pitmaster, an expert in the art of Texas barbecue. That's been cooking for a year now, and has supplanted the R & B business.

If you've never been to the USA and in particular the southern states, your idea of barbecue may be of blackened sausages, dodgily cooked burgers and chicken which has a 50:50 chance of poisoning you. And, in this country, to make things worse, this is usually done by men who do no other cooking. Think again. 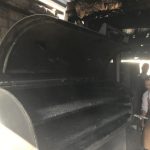 Traditional Texas BBQ involves meat expertly prepared, coated with a rub, then cooked in a smoker, as opposed to over an open flame, for 12 - 16 hours. I've eaten some of the best on offer over there. Trust me, at The Smiddy it's every bit as good.

How much can you learn in three hours of a process which takes four times that long? More than you might think. I'm there with one other pupil. They take a maximum of three at a time. We also have input from Emma's dad David, sometime bigwig in the New York music scene and serial winner of Al Pacino lookalike competitions. Over a shot of rather good bourbon (I hadn't touched the stuff since 1974 after O/D-ing as a 20 year old in Los Angeles) Cameron explains the process. The selection of wood is important to ensure a clean fire. Then there's the meat. The Smiddy team would argue that their product is superior to what you'll get in The Lone Star State, because of the quality of our beef here. At The Smiddy they use grass fed beef as opposed to the normal American grain fed. Brisket is one cut which is perfect for this process. Cameron is proud of the fact that they are the only business around to dry age their own. Head chef Darren, an affable New Zealander, demonstrates how to trim the brisket. No easy task. 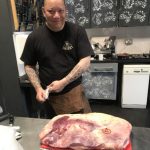 Next you apply a rub. I know that different US states have different styles, some wet, some dry as here. Cameron mentions salt, pepper, cumin, paprika and garlic powder. I'd bet a 20 dollar bill that there are some secret ingredients he's not sharing. Having given us the tour, and started off a deceptively simple batch of corn bread, Darren produces a couple of massive tomahawk steaks. That's actually a ribeye with the bone left long, partly for show, but partly to help turn them. We actually learn how to cook these beauties, this time on a conventional barbecue. I would have done a combination of sear and oven bake as Darren did, but the preparation took me by surprise. A bit of oil then a very thick crust of salt and pepper. Then 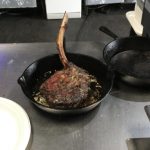 instead of waiting for the fire to die down, the initial sear was over a shooting flame, producing a gloriously tasty brown crust. At home, you can do this in a very hot pan. Then into a hot oven. Finally, and most importantly, the resting. Your resting time for your meat should be at least half of the cooking time, Darren tells me.

The session finishes with lunch. What a lunch! The tomahawk is sliced up and served with brisket, burnt ends, pork ribs, the corn bread we made earlier, and a selection of sides, washed down with a good selection of top notch craft beers. If you go as a paying customer you can do takeaway, or eat at the trestle tables outside. The plan is to install a 100 seater tent in the not too distant future. 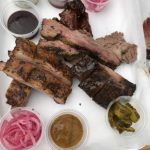 I talked about adaptability. The school was originally at night: now on Saturdays and Sundays from 12 - 3. Adaptability saw Cameron building his first smoker himself for a few hundred pounds before a professional model was acquired. The team are on an ever evolving process, taking advice and tips from world renowned experts such as Danielle "Diva Q" Bennett. The menu is constantly evolving, with a bewildering array of side dishes and desserts.

Check out their website and get down here to sample the delights for yourself. For the foodie in your life you can buy vouchers from £25 or treat them to the BBQ School experience for £120 + VAT.