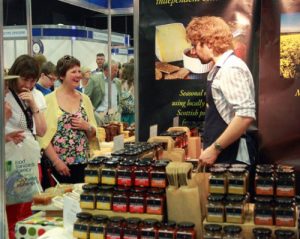 Eat Safe: Use A Condiment

It's not entirely certain whether this warning, which appears on the lids of our hero's products, has the backing of the World Health Organisation, but it's not a bad strapline. It's also an indicator that this is a business with a smile.

Don't, however, confuse that with something that is less than one hundred per cent dedicated to quality, to sustainability and to flavour. Byam Trotter is now in his twelfth year of trading. Having started from his parents' kitchen, he now occupies 4000 square feet (very well) hidden in Kirkcaldy's Mitchelston Estate. Turnover has increased by 500% in the last three years. He must be doing something right. I have to say that, having tasted most of his wares, I can vouch for that. Business started as a matter of economic necessity in the aftermath of the banking crash. If you can't get a job, employ yourself, someone advised.

On a holiday in Italy Mum had enjoyed  mostarda (the nice fruity one from Cremona, not the vile mostarda alla frutta which blows your head off). Unable to source it here she found a recipe. Byam learned to make it and was off and running. Not long thereafter the excellent Uncle Allan's Chutney was added to the range. (Allan does exist, but is mum's oldest childhood friend, not technically an uncle. I don't think Trading Standards Regulations cover that sort of thing.) My personal favourite is A Bloody Shame, essentially a Bloody Mary relish. The shame is that there is no vodka in it - the alcohol would disappear in the cooking process.

A selection of very fine jams, strawberry, raspberry and blackcurrant has proved very popular. Ingredients are sourced as locally as possible, and the sugar is British, from beet not imported cane. If as a child you liked Rose's Lime marmalade then came to realise in later life that it is tooth-achingly sweet, go for Byam's Mojito Marmalade, a superior grown up version. 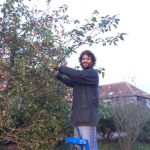 Some products are seasonal. Wild Garlic Pesto involves foraging in a Fife estate, and ingredients for the Christmas chutney come from a variety of sources, including the garden of Trotter père et mère. Much of this can be gleaned from the website, and doesn't really explain the business expansion. A chat with Byam was fascinating. Like many food producers he now does a significant amount of contract work for other small producers who are outgrowing their own production capability.

This began, apparently, with a contract for edible blue paint, as one might have expected. Suspecting that April 1 may be late this year I do some cross examination. Something to do with cocktails and wanting a glass look like a Bombay Sapphire bottle, I think. That contract is no more, but kimchi and sauerkraut are now being made in large quantities as the fashion for fermentation foments.

I hadn't been aware of the Spice Girl brand, packs which include marinades and pastes for a variety of eastern dishes, including rendang and Thai Satay curry. What next? Lockdown obviously hit sales to hospitality businesses, but online sales rocketed. It also increased the family involvement - by accident. At the same time that one of the company's chefs was stuck in Thailand because of Covid, Byam's brother Henry's restaurant closed. He now cooks for little brother. The siblings, it appears, can play nicely.

And the next five years? There are no plans to increase the product range, but expect more contract work and still larger premises. There will, however, be no change to the small batch production and home made feel. The stuff isn't yet 100% organic, but that's being looked at. The reopening of the hospitality sector also opens up more opportunities.

Byam has come a long way from cooking in his parents' kitchen. Having said that, this is still a business which is small enough to be light on its feet, with a dynamic, energetic owner. One to watch, as they say.

For more information about Byam's business and where to buy his products, click here to visit his website.