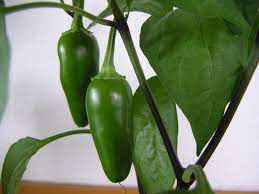 Sometimes one is simply spoiled for choice. You can alight on a letter for a food alphabet columns and lo! the world is your oyster. As it may turn out to be when we get to O in a few months' time. But J? Fewer examples than you might think. Jackfruit, currently best friend to vegans. I rejected this, as it's tasteless and currently best friend to vegans. Jams and jellies? Worthy of a book in their own right, but not one written by me. L is the house champion on this front, having converted some very ugly looking green things from our front garden into nearly a dozen jars of delicious quince jelly.

As I often do for this feature, I turned to the Larousse Gastronomique (for which endless thanks, McCalls). A whole section on Japan; a few other possibles; but of today's featured item, not a sniff. They're not much of a nation for spice really, the French. Hey ho.

While many members of the chilli pepper family are closely related, today's heroine is a stand alone, but with an ancient history. Jalapeños were known to the Aztecs, and like many products originally from Mexico were named by the Spaniards. The word simply means from Xalapa/Jalapa, the capital city of the Veracruz region of Mexico. It is probably the most popular chilli in Mexican cuisine  and a major export.

It's a chilli for those who aren't scared of a bit of heat but who aren't crazy. You probably know of the Scoville scale, a measure of the heat of respective chillies. Jalapeños generally measure between 3,500 and 8,000. By way of comparison, cayenne pepper is in the 25K - 50K range, with Scotch bonnet starting at about the 100K mark. They tend to be picked when green and fairly immature. Different fruits from the same tree or even the same branch can vary widely in heat. As with all chilli, use with care.

Research for this column always unearths some fascinating facts. The jalapeño has similar characteristics to a tomato iin that the skin can be a safe environment for foodborne disease. It is widely believed that an outbreak of salmonella in the USA in 2008 came not from eggs as one might have expected, but from jalapeños imported from Mexico. I wouldn't lose sleep. By the time they reach our shores they've probably been sanitised to within an inch of their lives. Pickled ones are increasingly common these days. That's probably what you'll see scattered over a portion of nachos.

They turn red when allowed to ripen. You won't see them so often in that form, as these ones tend to be smoked, when they become chipotle peppers. No, I didn't know that either. In Friday's Tom Cooks! we'll find a few ideas of ways of using them.