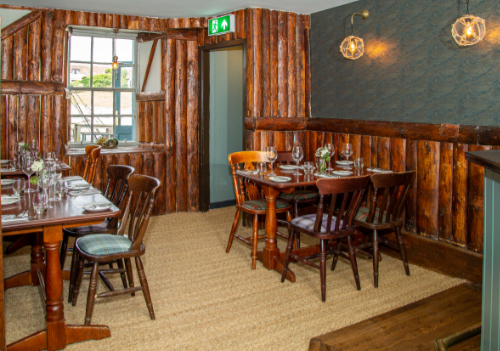 The Kingdom of Fife, where today's subject stands in a prominent position on the coast, is my home territory. I am a proud native, and spent most of my professional life there, much of it looking after the publicans and sinners of the licensed trade. I therefore grew up well versed in the quirks which Fifers inflict on the English language. Take the word doubt, for example, used by Fifers with the completely opposite meaning from the rest of the country. I doubt it's going to rain means that the speaker believes precipitation to be likely. In my younger days, when I still did criminal law, I inadvertently caused consternation to a few clients by telling them that I doubted they would be sent to prison.

Or the word rare. Not something occasional; instead, very enjoyable. One might sit back replete after an excellent Tom Eats! dinner, pat one's stomach and exclaim, that was rare! A different meaning again in food terms, but we'll come to that.

There are two Fifes. The west and central part, whence I sprang, has some interesting historical parts but, in the main, is less than scenic. The pretty bits are to be found in the east, particularly on the coast. That area is known as the East Neuk, and the East Neuk begins here in Largo. More specifically we are today in Lower Largo, where the coastline has been dominated by The Crusoe since the mid 19th century. To some it is imposing, majestic even: to the author of The Buildings of Fife it is a harled lump. You pays your money...

What is certain is that for a good while, until the Bucknall family took over in May, The Crusoe had been quite a sad place. It closed down altogether, amid stories of VAT fraud and imprisonment. It's been completely refurbished, but the basic character has been retained. The Bucknalls know their business. They started at The Bridge Inn in Ratho, and now also own The Ship Inn along the coast in Elie.

If you're wondering about the hotel name, yes, it is named after Robinson Crusoe. Alexander Selkirk, the real life inspiration for Daniel Defoe, was a native of Lower Largo. You can see a statue at the site of his birth at 99 - 101 Main Street.

We dined here with Fife's Food Ambassador and Fife's Greatest Photographer, who also very kindly put us up for the night. To make a bob or two during the worst of the Great Plague, the car park was converted into a beer garden. While not everyone is pleased, it does look quite spectacular as you approach at night, the covered structure glinting like a giant spider. Whatever web may have been spun, it had attracted a lot of customers. Hotching. (Not a Fife word, I think.)

Manager Jacky still found time to say hello. She along with her chef partner Ross run the place, to very good effect. Staffing can always be a problem, but not here apparently. We were very well looked after all evening by the exuberant Nicole from Leven, just along the coast.

Having found the menu online, I noticed that there is a section entitled Crusoe Favourites. I suspect that this doesn't change much. In conservative (in a culinary sense only) Fife, it would be madness to abandon the fish and chips, steaks, pies, burgers etc. But I was delighted to see lobster thermidor there too. There is, however, a lot more. 5 options for Nibbles (6 if you include oysters within that definition), 8 starters and 8 mains over and above the favourites. A lot of choice in other words, and clearly much use being made of local suppliers.

I very much enjoyed my starter, though I think that some trading standards rules may have been breached. It was described as bubble and squeak with smoked ham haugh and creamed leeks. What came seemed to be completely devoid of potato or cabbage, squeak-free you might say. Reviewing the menu, I'm pretty certain that I was served a pulled pork croquette which featured on the following starter, along with the creamed leeks. All very tasty, but a little puzzling. Roasted beetroot from Largo Estate came with goat's curd and gingerbread. The combo of mussels with chilli and chorizo was a fine variation on a theme. Scallops are always a delight, served here with celeriac purée, black pudding, n'duja (a soft and spicy type of Calabrian salami) and hazelnut. 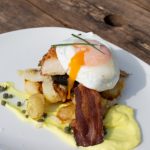 Looking at the carte online a day or two earlier, I could hear a pork schnitzel calling my name. Being seasonal (and, to be frank, cost saving) this had been changed to a pheasant version. Nicely done, with crushed potatoes and black pud as well as the usual poached egg and capers. Fish options include a fish and shellfish stew, hake and halibut. Other mains sampled included honey glazed duck breast and loin of venison, each with a tasty sounding cast of supporting characters. Duck faggot, confit duck leg and chips with the former; game sausage and roasted squash with the latter. That's an awful lot of work. Pub food this ain't. There is a range of sides available, but you really don't need them. Unless you're greedy. Or a Fifer. It has to said that many of my fellow countymen will consider themselves shortchanged if they're not full to burst after eating out.

And I suppose this same culinary conservatism must affect the meat cookery. Back to rare. Both the venison and duck were cooked for a bit longer than I would expect these days. Not overdone in any way, but certainly not rare. That got me thinking. Have we just been brainwashed by the current generation of TV chefs? I recently saw Gordon Ramsay berating a hapless contestant in Hell's Kitchen for allegedly ruining a rack of lamb which seemed perfect to me. The Masterchef people are the worst offenders. They regularly applaud beef and venison which to me look raw. One Scottish contestant had the guts to tell them that if he cooked beef their way it would be sent back to the kitchen immediately. He didn't win.

As COP26 tries to turn the world greener, brigades of cooks are trying to turn us diners pinker. The fact is that my fellow diners eating duck and venison thought their dishes perfectly done. Eating out is expensive, and going to get more so. You are entitled to have your food prepared the way you like it. 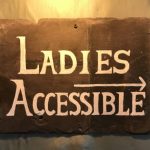 Well, it is beside a harbour, I suppose

There really is nothing not to like about The Crusoe. As both our hosts were working the following morning, we walked along the coast and came  back here for breakfast. If anything, it was even better than our dinner. I'm sure there was much celebration when the castaway Alexander Selkirk returned home. Equally we should be celebrating the return of The Crusoe, like being reunited with a long lost friend.

Thanks to Caroline Trotter for all photos, apart from the Accessible Ladies one, which is from my personal Bad Taste collection