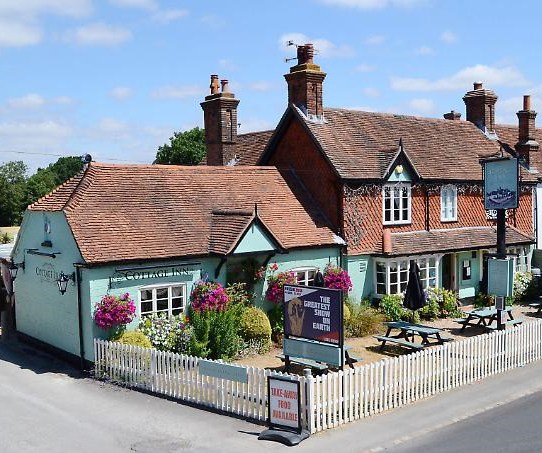 Bucklebury, in the North Wessex Downs, lies to the north of the A4 between Reading and Newbury, and yes, the name does ring a bell. We became famous, briefly, when Catherine Middleton who was brought up here, and whose parents still live in the parish, married some prince or other. The Middletons, of course, live at the posh end of the parish, and I live in Upper Bucklebury, now the most densely populated part, mainly built post war. Bucklebury goes back a long way, being mentioned in the Domesday Book, and, during the Second World War, Bucklebury Common was given over to the war effort, being an army camp and storage facility in the build up to D-Day.

I moved here in the late 80s and the pub on the main road was called The Three Crowns. During the 90s there was a drive-by shooting (yes, really!) by a local family who had been barred from the pub. Windows were shot out and the pub closed down for a few years, re-opening as The Cottage Inn. It had several incarnations – a bistro, an Italian restaurant, and several landlords giving it a go as a pub. Then Gary Bush came along. Hardworking, genial and a good listener, Gary transformed the pub into what the locals wanted: a sports bar one side and a comfortable place to enjoy very reasonable house wine and decent beer, (West Berkshire Brewery), good quality basic pub food at a reasonable price, and a place to take the family. His paddock behind the pub is home to chickens and goats beloved by local children. Youngsters have room to run and play on the play equipment while adults sit at the picnic tables. Gary hosts many local events and is the heart of the community. The Cottage has been CAMRA Community Pub of the year on several occasions.

When he has had to close during lockdown, he has opened for takeaways and these have been a regular weekly treat for us and our elderly neighbours. We drop theirs off in their porch. 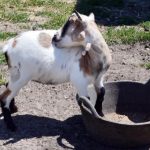 Yes, they have a kids' menu

My son and family often drive from the nearby town for their takeaway and the grandkids report that the children’s menu is excellent. My granddaughter absolutely loves the macaroni cheese. (Sorry, but I can’t bring myself to call it Mac and Cheese!) 11 out of 10 she says.

Unfortunately the most recent version of lockdown does not allow the takeaway beer which we so enjoyed. In the previous lockdown when this was allowed the variety of containers was very funny ranging from 4 pint milk cartons to trendy growlers.

Over the weeks we have had cod and chips, mixed seafood basket (unfortunately only on the menu for a few weeks), or spicy chicken burger in a brioche bun with chips, but we usually fall back on yesterday’s choice for us both: sticky barbecue ribs and fries, (but obviously, we 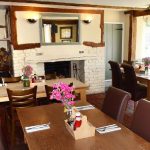 substitute chips for fries). Next door went for breaded scampi and chips, and vegetable Balti.

The ribs come as two racks of approximately 5 or 6 each so 10-12 ribs each, slow-cooked till the meat falls off the bone as soon as you bite into it, in a delicious barbecue sauce. As pub food goes, these are 10/10. M. next door, poor appetite after a prolonged period of ill-health, used to love the cod and chips but finds the scampi lighter. He said last night’s was better than ever and was a 10 for a pub takeaway. Unfortunately the Balti, J next door reports, was just OK. Cooked vegetables with a spoonful of marrowfat peas (she didn’t approve of the protein element – thought some butter beans or equivalent would have improved the dish), and a bit of rice mixed in but very little flavour. She added some spices of her own to flavour it. (Only 4 out of 10)

The fries v chips debate: I am the same age as Tom’s wonderful wife having been friends with her since 1969, so you know my approximate age. It seems to me that younger folk tend towards fries and older towards chips. Some of the Cottage Inn’s dishes come with fries and others with chips, but luckily Gary understands and is happy to swap. I’m told that the fries are very good – deliciously crunchy, but my experience is with the chips which are fabulous. They are big, chunky, soft in the middle and crispy on the outside, sticks of temptation. The portions are generous and I try to leave some… Hey, life is too short. 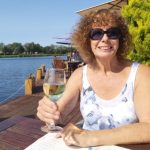 There are far too many things I could write about the lovely Ms Hillerton, but given her own admission that she enjoys her temptation big, chunky, soft in the middle and crispy on the outside, I'll say no more. Thanks, Anne, for joining the ranks of superstar guest contributors.