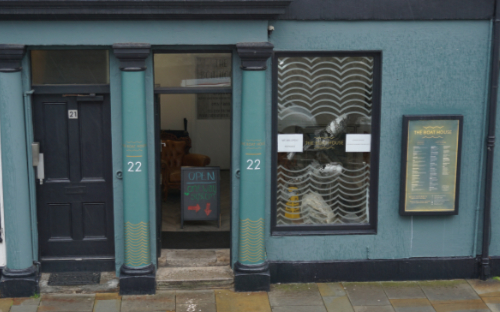 Can it be that every COVID has a silver lining? I visited here in August, almost exactly a year after the last time. That day, a Monday, having failed to get a table at the then recently opened, capacious Scotts, just along the road at Port Edgar, we came here. I knew the place had been on the market for a good while. It looked tired, and was, by contrast with a major competitor, almost empty. This year we visited twice in a week shortly after lockdown eased. My initial assumption was that it must have changed hands. Now decked out in an elegant green and gold decor, the place was heaving. In fact we had struggled to secure a table at the time we wanted. Could it be that the Chancellor's Eat Out to Help Out scheme was more than a gimmick. (Though it must be said that they were pretty busy the previous Friday too, when EOTHO didn't apply.)

The ferry reference is the boat route taken by Queen (later Saint) Margaret when travelling from Dunfermline to Edinburgh (or was it vice versa? No answers, please.) At the east end of the village there is the Hawes Inn, referred to in Robert Louis Stevenson's Kidnapped. The inn itself is in the shadow of the Forth Bridge, first and, to my mind, most magnificent of the three majestic crossings with which this seascape is blessed. To get to The Boat House, park your car at either end of the village and squeeze your way along the unfeasibly narrow High Street. Your destination is on the river side of the street, hard on the water down some steep stairs. There are a couple of dining areas plus an outdoor patio. On a fine day, from the latter you can supervise kids on the shingle beach. Even from inside the view is spectacular thanks to a glass wall. If your party includes a one year old who loves any type of moving vehicle, there are trains, boats and planes to provide endless pleasure. 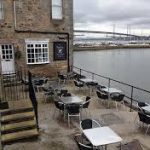 The food is pretty decent too. While this isn't the place for cutting edge, it's not a menu full of cliches. There are chips, but not with everything. I am told that the place has been in the Steward-ship of the eponymous Paul (that's Paul Steward, not Paul Boathouse) for about 14 years. As you would expect from a seaside location, the emphasis is on fish, and the menu is more extensive than that on offer from many places in this time of the Great Plague.

A sharing plate of tapas had just about everything from the starter menu and a bit more. The hummus is home made (I would prefer mine a little more unhealthy, but my waist line attests that). There was charcuterie; there were prawns; there were mussels, pate, tempura veg and more. Amazing value at £13,95. It never ceases to amaze me how many Scottish eating places are careless with a deep fryer, usually in failing to secure that the oil is sufficiently hot. No such problems here. Deep fried squid is not a rarity these days, but served on a bed of crispy (I nearly typed krispy) kale with a light yoghurt and coriander dressing, instead of the usual sugar laden dipping sauce, it made one almost believe it was a healthy option.

Seafood curry was advertised as being in the Malaysian style. Pleasant if unremarkable, but containing a generous quantity of fish. A combination of sea bass, crab risotto and tempura samphire is a celestial union if executed well. The fact that the veg was asparagus instead of samphire in no way detracted. The fish was very good and perfectly cooked. Sadly, the risotto was the weakest link. Tricky to get right in a busy kitchen, this was a little underseasoned and overcooked. Finally, two of us went for a Casa Johnston favourite, a classic Scottish combo of smoked haddock, chive mash, cheese sauce and a poached egg. One can imagine this sticking to the ribs on a dank February day, the bridges hidden by the haar (thick sea mist), the rattling of the trains like ghost riders in the sky. Given how quickly Scottish weather can deteriorate it's a perfectly reasonable dish to have on one's menu at any time, and it was very well received.

Places still feel odd. One is used by now to masks and visors, but everywhere has different procedures for checking in, queuing, going to the loo etc. If you have smooth and experienced staff, it's better. I'm being lenient on restaurant staff just now - the place has been reopened for less than a month; however, their short term memory loss was  worse than mine, but I can cite age as an excuse. You really ought to know what dishes you are delivering, and how hard is it to shut the door when you go out to the terrace empty handed on a breezy day? With luck the service will be better when you visit, as you ought.

Over the years I've enjoyed my jaunts here. When we are more accustomed to the new normal and, better still, when we revert to the old normal, this will be better still.