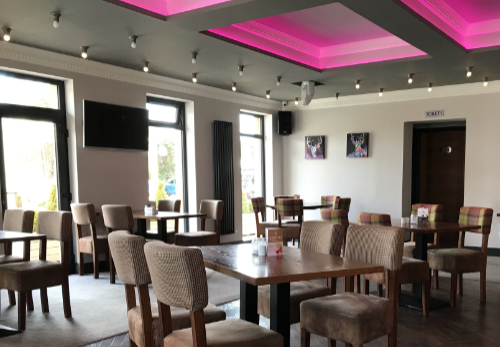 For many decades, I and a generation of Fife folk have known this establishment as The Pitfirrane Arms. I'm not sure when the name changed. Don't confuse it with The Adamson in St Andrews. In fact this place has a far more legitimate claim to the name than its East Neuk namesake. The moniker comes from the family who own it, together with many other licensed premises in the area. By way of contrast the St Andrews restaurant is named for a photography pioneer. 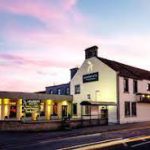 Forty years ago, this place actually had a decent reputation for its food, but that was back in the day before restaurants proliferated on every street corner. I hadn't set foot in it for many years, and was simply expecting pub food. Nothing wrong with that, provided it's well done.

Our urbane, urban chums G & J surprised us before the pandemic by emigrating to a village in the Kingdom of Fife, setting up home not far from here. Time to visit.

The front area and bar of the hotel have been spruced and cheered up a lot, and very nice they look too. My first concern, however, was the emptiness of the dining space at 1 o'clock on a Saturday. Still, a smiley greeting from pleasant, very young staff.

As anticipated, it's pub fare on display, though there is a separate lunch menu from which you could have soup and a sandwich for under eight pounds. If you're selling food to folk from west Fife, your portions had better be hearty or else. So it was great to see the sensible approach of offering many of the staples, listed as Adamson Favourites, available as half portions. I think that's called knowing your customers.

That section had, as you would expect, steak pie, fish and chips, lasagne. There is whole chunk of the menu dedicated to burgers and steaks at keen prices. A couple of other fish dishes for the pescatarians and, more daringly, a couple of risottos. From the starter menu we had a couple of dishes. While haggis bon bons may be everywhere, they are a reasonable test of a kitchen. These had a thin, crispy exterior, contained good quality haggis and were perfectly cooked with no hint of grease. I don't know if the pepper and tomato salsa was home made, but it was pretty decent stuff. Sadly, the leaves had no dressing, but when one of our number asked, with a straight face, for some balsamic glaze, it was produced immediately. A warm smoked mackerel salad was less successful. Ample fish, served warm, but the salad lacked flavour and there was too little of the advertised rhubarb ginger dressing. 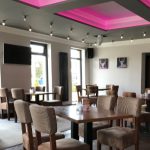 Mains included two risottos and two classics, lasagne and steak pie. I'm not sure which order to take these in, as the wheels started, if not to come off, to rattle on their bearings. The chicken apart, the chicken and chorizo risotto was unpleasant. With chorizo and sun blush tomato there should have been flavour a-plenty. I think the kitchen just forgot to season at the appropriate times. A courgette and wild mushroom risotto was better, the lack of seasoning compensated for by a nice lemon hit.

Sadly the lack of seasoning continued with the lasagne. Salt, pepper and herbs were all sadly lacking. I read recently that the great Pierre Koffmann once commented that sometimes the difference between decent and poor cooking amounts to no more than half a spoonful of salt. I'd be surprised if he's ever dined here, but you get the point.

Here in Tom Eats! we like to end on a high(er) note. It has to said that if, in a West or Central Fife kitchen you can't produce a decent plate of steak pie, you might as well leave town. It is a dish which is likely to grace the majority of christenings, weddings and funeral teas, and, for all I know, bar mitvahs and Eid celebrations too. It's in our DNA. So I'm pleased to report that I thoroughly enjoyed my (huge) portion. Good meat in a tasty gravy, veg which were nicely al dente and excellent chips. (Ironically, the latter came perfectly seasoned.)

Reasonable pub grub. If I were passing and found myself hungry, I would stop. Just a little more care in the kitchen could improve things (and the score) no end. Or maybe they could just get M. Koffmann in for a couple of days.