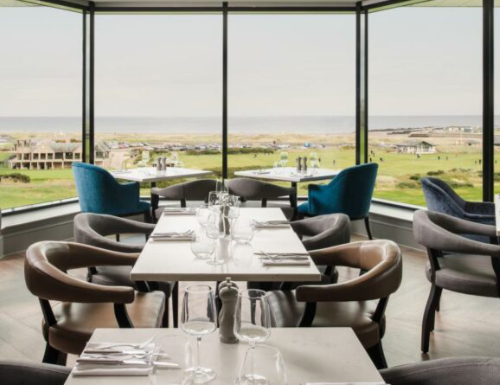 I've been coming to The Old Course Hotel on a regular basis for over 20 years. While it's tended to be a base for Tom Eats! forays into the town itself rather than a dining in experience, I've kept an eye on its changing culinary offerings. The most established of these is the Road Hole Restaurant, an eyrie at the top of the hotel which hosts both the smart dining and the (excellent) breakfasts.

Most five star international joints have somewhere else for less formal eating, steaks, burgers, fish & chips, the usual sort of thing. For a long while that space in the OCH repertoire was filled by the Sands Grill. It closed years ago, but the sign is still there. For a long time, therefore, the casual option was restricted to the decent enough pub grub in The Jigger Inn, or room service.

With what feels like phase 10 of the hotel expansion having been completed, I was interested to read of the opening of this new dining space intended, or so I thought, to fill the middle-of-the-road gap. As technology was letting me down (mine, I think, not theirs) I hadn't seen the menu in advance. (Note to self - stop peeking in advance. You're removing the element of surprise from the dining experience.) Surprises are, or should be, good.

Surprise number one. To reach the loft you have to go through the Road Hole Restaurant, converting a traditional, slightly hushed dining space into a thoroughfare. The modern, stripped back space with its muted and sophisticated colour scheme is, in the main, an elegant one. but stepping from one space directly into another just seems incongruous. There seems to be no separate entrance, though our table faced on to an open door which seemed to be the fire exit. There was then a raised bench table, with the banquette seating covered in a faded mustard fabric. Vaguely reminiscent of the colour of someone's Granny's front room, and completely at odds with the rest of the place. 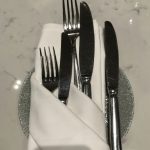 No table cloths. This proves that the place is casual and cool. The cutlery tied up in a convoluted way with an intricately folded napkin. For that amount of work, it would be easier just to set the table. Then, surprise number two, the menu. Not casual at all. A plate of soup starts at £10, and mains go up to £42, with sides an extra £4.25. One or two of the dishes also appear on the Road Hole menu. We had signed up to a dinner, B & B package - booking the room alone would have been more expensive - so we were given something headed Market Menu A. It didn't have a price on it, so I'm not sure whether it's available to all. We apparently had a credit of £40 per head as part of our package, so I'm guessing that's the cost. There were two starters, three mains and two puds. The a la carte was a little larger, lining up in a 6:6:5 formation.

A hot smoked salmon salad was odd. It featured a large piece of warmed hot smoked fish (if that makes sense - it was a new one on me). The advertised soda bread had gone AWOL but there was a square of toast with some caviar. Sadly, L hates caviar, so I had to scoff it for her. There was a pleasant enough gin and lime dressing, but the salad part comprised just a few lettuce leaves. A ham hock roulade didn't look like it had been rolled as advertised, but as a terrine it was perfectly fine.

To mains. Braised short rib had been cooked slowly to an excellent degree of unctuousness. Sadly, chef didn't know when to stop reducing the gravy. It had acquired a slightly bitter edge, and was probably related to the stuff they used for the tiles on the Taj Mahal. The green beans were squeaky. That's a pet hate of mine. Shivers go up the spine just writing about them. Finally, the dauphinoise were underseasoned, probably because the kitchen's salt quota had been used up on L's hake dish. Considering the fact that it came with chunks of salty pancetta, it really didn't need more.

I truly hate it when waiting staff are sent out to explain the concept. In fairness, no one was so crass here; however, if the management were to be asked to do it, I fear they might struggle. Neither fish nor fowl nor good red herring, as my late ma might have remarked.

The following night we dined in the Road Hole Restaurant itself. It was better, but the experience was not enhanced by it now being the well trodden path to the Loft.