I made up this dish and wrote down the recipe in the depths of January. As the weather improved, I thought it might have to go on the back burner till the end of the year; however, with the mercury hovering around 4˚C here, I decided it was too early to be abandoning hearty winter fare. 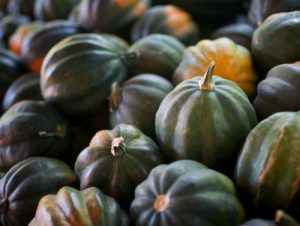 If seasonality is your thing (and why wouldn't it be?) you're quids in with squash. Available all year round, from your courgettes and marrows in the summer to pumpkin and butternut in the winter. The obvious difference is that the latter have winter coats, hard and thick.

What all members of the squash family have in common is that they are boring as hell.  If you have no friendly cookery books to help you, they are best avoided, like computer geeks, or men at parties who want to talk about trains. But if food is inherently dull, you need to do something to liven it up. When your friend who has an allotment comes to offer you some of his courgette glut, don't pretend you're out: instead, invest in my friend Christopher Trotter's excellent little book on the subject. Or, as I did in creating this rather nice winter warmer, use 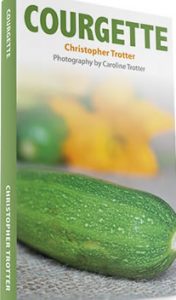 You can stuff most types of winter squash. I used an acorn squash, the round green one with the ribbed skin. A single one, about 18 - 20 cm in diameter will feed 2. The technique involves baking the prepared squash to soften it, preparing your filling of choice, then marrying the two together. Now you have been warned about the inherent dullness of your main ingredient, so take heed. In much the same way that pasta sauce really needs to be overseasoned, so you need a punchy stuffing here. To be honest, I was concerned that I'd overdone it on this filling, but when combined with the veg it worked well. N'duja is a soft spreadable sausage from Calabria (or from Hammond Charcuterie in Berwick). You could use finely chopped chorizo in its place in which case I would use a little more. If you are using n'duja be aware that it's quite fiery - you may not want that extra chilli. Gruyère can be used in place of Taleggio, though the latter has a stronger taste.

For the final assembly 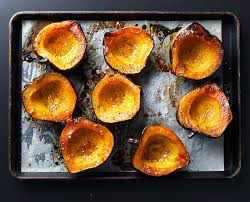 Preheat the oven to 190˚C/Mark 5. Pour about 1cm of boiling water into a baking tray and put the squash halves on it, cut side down. Cover loosely with foil. Bake until the squash is very soft. Some recipes will tell you 30 minutes: mine took a good hour. While this is happening, make the filling.

Gently cook the onion, pepper and garlic until soft. Season with s & p and some chilll flakes. If using chorizo, cook this down with the veg; if using n'duja, add to the softened veg. Melt the cheese through the mix and check the seasoning. It should be fairly powerful.

When the squash halves are ready for stuffing, cut a little sliver (NOT a hole) in the base of each so that they will sit flat on a plate. Drizzle the flesh with a little olive oil and season with s & p. Put a slice of mozzarella in the base of each, then divide the filling between the two halves. Cover again with the foil, return to the oven and bake for about 15 - 20 minutes until the filling is bubbling hot. Cover the tops with mozzarella and a thin layer of breadcrumbs. Drizzle with some more oil, then cook either in a hot oven or under a grill till the mozzarella has melted. 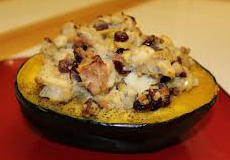 The squash will be so soft that you can easily mix it up with the filling. Magically, a super dull veg has turned into something rather lovely.