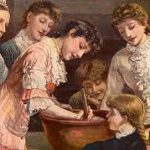 For a number of years now I have been making my own Christmas pudding. While I guess my mum did too, at least in the early days, I have no recollection of any great tradition surrounding it, the silver threepenny excepted. I normally get round to it in the latter part of November, but when people started to issue reminders about Stir-up Sunday, I had really no idea what they were talking about. Let's face it, there are enough myths about our modern Christmas to fill Santa's sled many times over.

Take Christmas pudding itself. It probably goes back to medieval times. Plum pudding, as it was known, contained no plums, the word being the pre-Victorian term for raisins. We now think of mincemeat as a confection of chopped fruit and spices. If you think about it logically, that's a very odd name. The rationale is that it originally contained minced meat, the combination of meat, spices, and even sugar being a not uncommon one, the latter two ingredients designed to show off your wealth.

There is no doubt that Prince Albert, with his German heritage, helped shape our modern Christmas, but we can trace the origin of the pud as we know it back to a recipe book of 1714. There is a story that George I introduced it around the same time. Historians are sceptical. As sceptical indeed as was I about this stir up date. Well, how wrong can you be?

Take a bit of the Book of Common Prayer and some schoolboy humour and lo! a tradition comes among us. Stir-up Sunday features in no less an authority than the Oxford English Dictionary. It is defined as-

The Sunday next before Advent...

The name is jocularly associated with the stirring of the Christmas mincemeat, which it was customary to begin making in that week.

You don't get the joke? Well, I didn't either. The clue is in the missing part ...(so called from the opening words of the Collect for that day.) I suspect most of my readers are not members of the Church of England, in which case you're probably not familiar with the Book of Common Prayer. The opening words of the prayer for that Sunday are, Stir up, we beseech thee, O Lord, the wills of thy faithful people. Get it now? So there you are, seated in your pew having completely forgotten it was time to make your pud until the vicar reminds you. Hilarious. 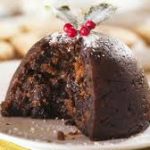 This year, Stir-up Sunday falls on November 21, this Sunday. By coincidence I will be making my puds that day. And for once I am determined that the stirring will indeed be done on the Sunday itself. To do that, I'll have to remember to start soaking the fruit on Saturday. I have to tell you that up till now the most commonly observed Christmas pudding tradition here at Johnston Towers has been Stir-up Monday. As I'm sure I've advised before, read the recipe in advance.

Food By Accident - Follow Up To Another Nice Mess

Thanks to Robert C, who reminded me of the history of Worcester sauce. An English aristocrat had encountered a fish based sauce when in India. He commissioned local apothecaries John Wheely Lea and William Perrins of 63 Broad Street, Worcester to attempt to recreate it. The first attempt was deemed inedible and left at the back of a cellar. When it was tasted again a year later, Worcester sauce was born.

And a real life example from Liverpool last Saturday. Jan B, mother of Handsome Chris, the partner of my youngest offspring, is renowned for the quality and quantity of her preserves. Jan's Jam is famous UK wide. She was making a batch of medlar jelly and forgot about it. When she went back to it, there was no way it would have gone into a jam jar and ever come out. She flattened the mixture between two sheets of clingfilm, cut it into squares and  sugared them. Behold, Jan's Fruit Jellies. Stunning.