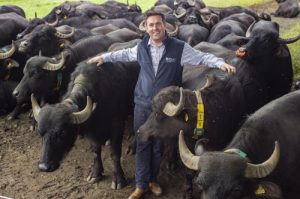 So Gordon Ramsay's production team for The F Word phone up your buffalo farm. They want to come up so the great man can see you making your buffalo mozzarella. Sure, you say. There's only one teeny problem - you don't produce mozzarella. In fact you've never made cheese in your life.

It wasn't quite like that, but not far off. Farmer, entrepreneur and risk taker Steven Mitchell is the sixth generation of farmers in central Fife. Dad died when he was 5, mum when he was 15. He did various things and spent a year abroad, considering his future. But the invisible thread pulled him back to Fife, to his uncle's farm at Clentrie, Auchtertool, near Lochgelly. Steven credits his uncle Tom as his biggest influence. Tom created and specialised in the now famous Puddledub pork range, and was a pioneer in selling directly to the public at farmer's markets. That left space at Clentrie Farm which had previously housed cattle.

While Scotland is famous for its beef, it's a very crowded market. Steven decided to start Scotland's first buffalo herd, for meat, not milk. The story of how he ploughed his entire inheritance into the venture was told by Channel 4 in a series called Tricky Business. Click here to find out more about how he began. Warning: it's not for those of a nervous disposition. You'll learn of the horrendous start up problems: the struggle to acquire a bull; cash flow issues that would have sunk a lesser man; and the very disappointing amount of meat from the first two carcasses destined for the debut trip to a farmers' market.

What you won't learn is the extraordinary chutzpah which boosted the business after the Channel 4 contact. Spending an hour in Steven's company is a delight. The resounding voice and ready smile make one believe that no problem would be insuperable for him. Well, the bank had just rejected his application for an essential loan. Dear Mr Manager, I'm about to appear on Channel 4. I don't want to misrepresent the bank in any way, so I'd be grateful if you could let me know precisely why you turned me down. 15 minutes later the bank reversed its decision.

While Steven had the vague idea at the outset to make cheese, that wasn't on the horizon when Gordon Ramsay got in touch - to feature buffalo meat. Ramsay's production team phoned again to say that they had too much meat on the schedule, so could they feature cheese instead. No cheese, so not possible.

Steven then had another brainwave - he seems to have a lot of them. He called back and suggested that the programme might feature his initial attempts to make cheese. Eureka! Urgently he acquired antiquated milking equipment, called in some people who knew how to 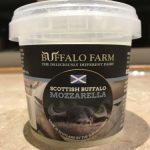 make cheese, and tried a first batch on the kitchen table. Gordon Ramsay appeared and was blown away by the quality, to the extent that he fancied investing, and a star product was born. Watch the programme here. This was the first, and remains the only, buffalo mozzarella made in Scotland.

The milk herd is now based at Bankhead farm, not far from Clentrie. Central Fife it may be, but the whole operation has an international flavour. The first buffalo herd came to Fife from Romania via Wales, and the head cheesemaker is Venezuelan Juan Vincente Reggeti. Juan's grandfather introduced water buffalo to Venezuela, and Juan has been working with the animals all his life. Happy chance brought him to Edinburgh and fate made the connection with Steven.

For those who don't know, a lot of mozzarella is made of cow's milk. In Italy this is known as fior di latte. It has little taste. When it melts, as a pizza topping for example, it goes stringy. Steven's mozzarella is creamy, has a good ripping texture and a lovely tangy flavour. It melts into delicious puddles. It's made with vegetarian rennet and is therefore vegetarian friendly. In short, it's lovely.

But there's more. Obviously milk yields vary from season to season. What else can you make? Ice cream of course. I was presented with a plateful of what I took to be vanilla ice cream. Gloriously rich. Buffalo milk has a much higher fat content than cow's. Something was different. Then it struck me. There was no vanilla added, or required. There are now six flavours on offer, more widely available since a recent deal was struck with Scotmid.

I could write a series of articles about this setup. Standing at Bankhead Farm with 360 degree views over Fife, the Lothians and Kinross, you truly feel there are no limits for Steven's business. I haven't mentioned the outside catering, the coffee shop or the huge range of mail order food on offer.

Who knows where he'll be in five years? A rival to Italian mozzarella? Oh no, says Steven. We'll be much better than them. Compare the pastures we have in Scotland to their grazing conditions. Burrata? Probably. Smoked mozzarella? Perhaps. A whole new dimension to this burgeoning enterprise? Don't bet against it.

To find out more about The Buffalo Farm and where to buy their produce, click on this link to Steven's website