In Wednesday's On The Side, I promised you a Spanish classic. It doesn't get more typical than this. Go into any snack bar, or anywhere offering the most basic selection of tapas and you will find tortilla on the bill of fare. Confusingly, given the close links between Spain and Mexico, this has nothing whatever to do with the cornmeal pancakes which, in their various guises, are a Mexican staple. Nor, in its purest state, should it be confused with what my mother would refer to as a Spanish omelette, which is an excellent way of using up all sorts of leftovers. That is much closer to an Italian frittata, which we'll have a look at next week. 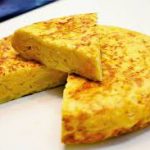 Today's hero is as often served cold as hot. Having sampled it a few times in Spain, I knew it contained potato, but on learning the recipe I was surprised to learn how much. I also marvelled how it could  always remain so moist, even when it had clearly been made some time earlier. A classic tortilla has just four ingredients, eggs, potatoes, onion and oil, olive of course. It is a dish to be made in a country where olive oil is cheap. Recipes which I have seen specify quantities varying from 2 tablespoons to 175ml to the best part of 500ml! (I have doubts about the latter.) For that reason I'll leave the quantity blank and let you use your own judgment.

Never use any olive oil other than extra virgin. The chemicals and other bad things which are associated with second and subsequent pressings are not good. Having said that, you're not going to use your very top stuff (unless your name happens to be Henderson and you are the UK Orodeal distributor).

The potatoes need to be waxy, such as Charlotte or Desirée. You need enough, when sliced,  to fill your frying pan pretty full. A non stick pan is ideal.

Ingredients (serves 6)  See the comments above re ingredients

Put the potatoes and onions in a bowl with a good glug of oil, salt and pepper, and mix together. Add another good glug of oil in a frying pan. Bring it to a medium heat then tip the contents of the bowl into the pan. The oil should be just visible over the potatoes.

Your aim is to cook everything slowly without colouring, so once you have reached medium heat and everything has had a bit of heat, turn it down to low and cook for about 25 - 30 minutes. Don't poke at them or the potatoes will break up. Use a fish slice to turn once. While the potatoes are cooking break the eggs into a separate bowl, large enough to hold the potatoes as well. Season with a little salt and pepper, then beat the eggs well.

When the onions and potatoes are cooked, strain off the oil and retain. With a slotted spoon, transfer the onion/potato mixture into the eggs. Return a little of the oil to the frying pan, then pour in the egg and potato mixture. Cook over the lowest heat possible. Every now and again run round the edges with a fish slice to make sure it's not sticking to the side. Cook for about 20 minutes until there is almost no runny egg on top. Unlike an omelette you are not doing any stirring or agitating.

What you now need to do is to flip it over. This is the only slightly fiddly part. Pop your fish slice underneath to make sure the tortilla hasn't stuck. Take a dinner plate or similar (ie NOT one with a lip) at least as big as the pan. Pop it on top and in one quick movement invert  the pan to tip the tortilla on the plate. Slide it back into the frying pan, cooked side up. (Aren't you glad you listened to me when choosing your plate?) Cook for another couple of minutes, then switch off the heat and leave in the pan to rest for another five.

Transfer to a serving pate or board and cut into six wedges. Nice on its own as a tapa, or with a green salad.