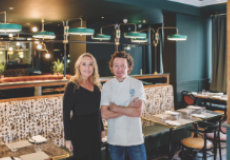 Only a couple of months have passed since I reviewed Scran & Scallie, this place’s older brother. The gist of that review was nice, but…  Fearing a clone, I had certain reservations about today’s lunch reservation. Michaela Kitchin, Tom’s wife, is influential in the design of his various places, and she has excelled herself here. Presumably the place was, once upon a time, three shops now nicely amalgamated with a décor which says Parisian bistro. Tables are quite close to each other, Paris fashion. I liked it well, though the Retired Captain of Industry was less sure. We were seated close to the rotisserie, the place’s USP. The idea appeals to me, though only time will tell if it is but a gimmick. These days most of our so called roasted food is in fact baked; however, it was seeing little action apart from one piece of protein, and an appetising looking pineapple.

References to staff are usually to be found later on in reviews. I must make an exception here. The front of house brigade comprised as nice a group of guys (no ladies in sight) as it has been my pleasure to encounter in a restaurant. Professional, helpful, fun, but in an unobtrusive way. Oh, and they do a great quenelle as well, but that was later.

Starters were merely good-ish. The advertised West Coast Fish Ravioli was in fact a singular raviolo. The shellfish bisque was a little heavy on the sherry and light on the seafood. Chef should visit Tom’s former employee at The Little Chartroom and learn. Hake brandade turned out to be a fairly undistinguished fish cake on a very green gloop. Aside from a baked clove, I’m not sure what happened to the garlic purée. So far, we’re in 6/10 territory, but things took off with the arrival of the main courses. A thick slice of lamb shoulder was perfection, slow cooked, enough fat for flavour, but none of the excess which can spoil this dish. A plate of roe deer had a generous amount of fillet. We weren’t asked how we wanted it cooked. It was pink in the middle, but none of the lurid almost raw stuff so beloved of Masterchef contestants. There was a “lollipop” of braised haunch and a smoother than silk celeriac purée. Sides (all extra) included good chips, fondant potatoes, and a big dish of lentils, perfectly braised with good stock, finished off with a wee slug of balsamic vinegar.

In the interests of research a dessert was shared. The roasted pineapple with rum sauce was tempting but was beaten by a classic apple tarte tatin. At table they quenelle the ice cream most elegantly, and serve it with a jug of caramel sauce. It’s not often that the sweetness of a dish is offset by ice cream.

As you’ll see, the place is not cheap (and the wine prices are steeper). In Stockbridge I complained of pub food at restaurant prices. Here you eat restaurant food at prices which reflect the cooking, the décor and the service. It’s not really what I would describe as Edinburgh’s south side, being on the border between Tollcross and Bruntsfield, but who cares?  Just a ten minute walk from the west end, one I was glad to take to let this lunch digest. I seldom return to places I’ve reviewed – I will certainly make an exception here.

Sad to report when I returned a couple of months later, all the charming staff had gone, the rotisserie lay empty and the menu had gone significantly downmarket. Would have scored 17/25.