If you normally read both Tom Eats! and Tom Cooks! don't read this column till you've digested the former. If you don't read Eats!, I can tell you that these are recipes for a few dishes which featured there. 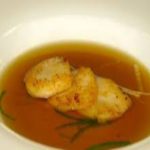 You may recall that Binkie's steward, McTavish, attributed this dish to chef's dalliance with a lady of the same name. A dish with that title did appear in Escoffier's 1903 La Guide Culinaire, but the recipe is different. It didn't make it to Ma Cuisine, Escoffier's Greatest Hits when he narrowed his repertoire down to his 2500 favourites. So maybe, just maybe, McTavish's story was true.

I was going to give you a recipe to make consommé from scratch, but then I thought, why? You need proper home made stock, a laborious simmering process, an egg white "raft" to clarify it, and straining through muslin. I've never made it, and I'm not aware of any non professional who has;  however, ever willing to please, I'll publish a recipe if there is the demand.

Warm your soup bowls. Heat the consommé until very hot and stir in the port. Place 3 discs of scallop in the bottom of each bowl. Ladle the soup over the scallops, garnish with the celery and cucumber, and serve immediately. 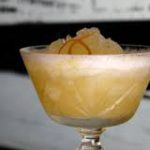 At Binkie's dinner this was served as a palate cleanser (or what the Italians call an intermezzo) as pictured right. Sounds like it would make rather a good cocktail. Make sure all the ingredients are well chilled. A recipe which I saw suggested mixing all the ingredients in a blender with crushed ice, which sounds a criminal waste of champagne, which I would always add last. If you were doing this as a dessert course, it would have the consistency of a granita, in which case it would make sense to drizzle the rum over at the end along with the fizz. If you're  making it as a cocktail and want to be flash, shake all the other ingredients with ice, adding the fizz to the shaken mixture.

Remember that your sugar syrup needs to be made in advance and allowed to cool. Probably essential if this is intended as a dessert, but I'd omit from a cocktail, or use less. To make sugar syrup put 2 parts caster sugar to 1 part water in a pan. Heat gently until the sugar has completely dissolved, then bring to the boil for one minute. Leave to cool.

Mix all the ingredients apart from the champagne and shake or stir well, making sure the mixture is very cold. Fill a champagne glass about a third full with the mix, top up with champagne and swizzle. Garnish with a sliver of orange peel if you fancy. 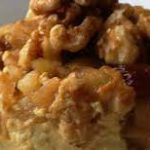 A steamed pudding at the end of that meal? No wonder Binkie bodyswerved it. Can't say I've made it - I'm just repeating the recipe. Probably made by that old drunk Joughin*. The recipe says it "serves 4, but fills 9 moulds". Almost certainly pissed when he wrote it. So you'll need individual moulds or ramekins, well greased. Remember that the sauce will need to cool before you add the whipped cream.

Put the flour, sugar, salt and baking powder in a baking bowl, and mix together well. Stir in the melted butter. Combine the eggs, milk and vanilla extract and add to the bowl gradually. When the mixture is smooth, stir in the apples nuts and raisins. Divide among the greased moulds, cover tightly with a greaseproof paper lid and steam for 45 minutes. Turn out of the moulds and serve with the sauce.

Boil the sugar and water "until the syrup spins a thread". (No, I'm not too sure what this means either. Maybe one of you pros can advise.) Pour it over the beaten egg yolks and stir quickly, then add the lemon zest. Set aside to cool, stirring occasionally. Just before serving, stir in the whipped cream.

The proprietors and management of Tom Cooks! advise that this recipe is made at the reader's own risk. No liability will be accepted. To those who say it is fool proof, I reply, so was the Titanic.

*Charles Joughin was Chief Baker on the Titanic. On the night in question, he was apparently pretty well oiled. Despite this, when the iceberg struck he superintended loading each lifeboat with provisions, and assisted women and children in boarding. He declined to take a place on a boat himself, returning to his cabin for another drink. He was apparently the last man off. Miraculously he survived for two hours in the freezing water before being hauled on to a lifeboat.