Sometimes I think that in a previous life I must have been a French housewife. Or have I just spent too long reading and watching Nigel Slater? When food shopping there are times, especially if you have planned a dinner or other event, when you know exactly what you want to buy, and precisely what you intend to cook. You can therefore easily be thrown if any of your key ingredients isn’t available, or isn’t up to scratch. Sometimes it’s much more fun to buy something and think later how to cook it. 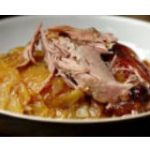 So Saturday saw me coming home from the butcher’s with a dod of shoulder of lamb. (I also had a kilo of stewing venison, and a pack of partridge breasts, but those are two other stories.) Other than the fact that I knew it was perfect for a Sunday, when you can stick it on to cook around 3 and eat at 8, with time to watch the football and possibly Doctor Who in between. I’ve done a lot of lamb recently using eastern herbs and spices, but this time I was in the mood for something more traditional. Browsing the net, I came upon a recipe of Mary Berry’s which I adapted. The lamb will be delicious, but the veg even more so, provided you don’t stint on the last stage to allow the potatoes to brown and absorb the glorious juices. On a whim we invited friends to share this, and ate about 45 minutes later than anticipated. The dish was perfectly happy kept warm covered in foil in a slow oven. Don’t worry about the fact that people might not like anchovies (unless there are allergies involved). They will melt away and you’ll get a lovely salty, umami flavour. You can omit them, in which case I would salt the meat a little before searing. It’s easier if you have a frying pan which can go in the oven and use that for the initial sear and roast, and a separate roasting tray to contain your veg.

Preheat the oven to 200C/Mark 6. Spread the lamb out on to a board. With a thin sharp knife, make a series of incisions into the surface. Put a piece of garlic or anchovy into each incision, pressing well down. (You will be searing the lamb, so you don’t want the garlic exposed, as it will burn.) Season the meat with pepper. No salt if you’re using anchovy.

On the hob, on a high heat, sear the meat in a little vegetable oil till brown on all sides. Roast for 30 minutes. While the meat is cooking prepare your veg. Layer the onions and leeks on the bottom of a roasting tin, then top with the potatoes. Season lightly with s & p, and add the herbs. After 30 minutes, remove the lamb from the oven. Reduce the oven temperature to 160C/Mark 3.

Pour the hot stock evenly over the veg and put the lamb on top, fat side up. Cover tightly with foil and cook for 2½ – 3 hours. Remove the foil (but retain it for later) for the last half hour. You want the lamb to be completely tender. Then remove the lamb from the tray and keep warm on a separate plated, covered with the foil. Increase the oven temperature to 220C/Mark 7. Cook the veg for about 30 minutes until they are browned and sticky. If you aren’t ready to eat, turn the oven back down to 140C/Mark 2, pop the lamb back on top, recover with foil, and it will keep warm quite happily for a while.