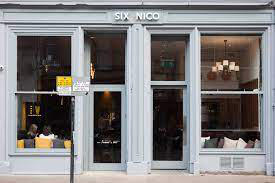 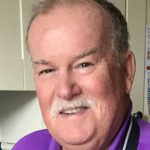 It seemed an excellent way to celebrate the boy’s significant birthday – a visit to the Country Living Fair in Glasgow with its wide range of food and drink to enjoy followed by a trip over the tracks to sample the delights of Finnieston.

This area of the city has grown in popularity at a remarkable pace over the past few years. At one time there was little to draw visitors to the West End of Argyle Street and its environs (apart from the legendary and much missed Creme de la Creme curry restaurant.)

Now the casual caller to Finnieston is met with a wide range of attractions from lively pubs with stripped back signage revealing their provenance, to themed restaurants across the spectrum of genres and flavours.

One such attraction is Six by Nico, the brainchild of Nico Simeone whose idea of a six course themed tasting menu changing every six weeks has spawned a chain of ten restaurants across the UK and the Republic of Ireland. During Covid lockdown this led to the popular and highly regarded Home by Nico service.

So what better way for the birthday boy, his Dad and our beloved partners to mark the occasion than a trip Down the Rabbit Hole, the magical theme of the moment?

There was no sign of Alice as we were given an enthusiastic welcome, our coats tucked away and guided to a comfortable corner table which offered more space than might have been expected in this busy restaurant which maximises covers across all of its sittings.

As it was though, to be told before our seats were even warm or a dish served, that we had to be out within the allotted two hours, was unsettling.

We passed on snacks and instead of the “matching wine” opted for a white and a red from France, both keenly priced and very acceptable. There was also sparkling wine all round, courtesy of Nico and the team, to mark the special occasion.

A large part of the attraction of the Six by Nico experience is the sense of theatre surrounding the theme and the story of each course.

Unfortunately the combination of the lively crowd and a waiter whom we initially took to be Antipodean but instead hailed from Essex made the story of the courses hard to pick up and mull over.

We began appropriately enough with the Mad Hatter’s Tea Party, a bold combination of mushroom tea, smoked bacon jam, truffle parmesan royale and a walnut and cheddar scone. The first three ingredients worked a treat but it had clearly been some time since the scone came out of the oven.

Rabbit and date ballotine followed with roasted carrot, tarragon pesto, rabbit Bolognese and carrot ketchup – the White Rabbit - followed rather too quickly for some of the group who felt a little rushed.

Paint the Roses Red had us all guessing – a combination of celeriac rose, baby beets, garden radish, olive soil and red apple caramel. It really did not work and we could only describe it as tasting stoury*.

The experience was quickly back on track with course 4: Eat Me, Drink Me as we enjoyed roast cod in a miso and yuzu glaze, bonito emulsion, turnip purée, pickled Tokyo turnip and dashi broth. Again some head scratching over ingredients but the overall result was outstanding.

The drama continued at course 5 as Off With Its Head combined pork belly, choucroute and apple gel with pig head croquette, cauliflower and sauce charcuterie to great effect although some of the dish seemed a touch overcooked.

Cheese was offered at a premium but we opted for the dessert course Learn How to Make Mushrooms which gave us chocolate cremeux, praline ice cream, candied hazelnut, smoked Maldon and cask sherry.

Finally we had been given some time to rest and savour an excellent pudding but as the last flavours settled it was “here’s your hat, what’s your hurry” as coats were gathered up and the team prepared for yet another sitting.

The Six by Nico brand is now well established and clearly very popular but on a next visit we would wish more time to enjoy the food and the theatre and less of a feeling of being rushed.

David Steele is a regular in this column, better known to you as Scotland's Finest Former Journalist (West). He is a demon golfer as well as being a bon viveur, gourmet and wit. Thanks, David.