The eyebrows of anyone who knows me are likely to rise considerably at the notion of my penning an article on shopping. As a leisure activity it scores as highly in my book as watching ethnic dancing or having bamboo shoots inserted under my toenails. But, dear reader, you have still got to get the hang of this new site. The clue is in the name, Tom’s Food! Clear?

And not just any old food shopping, the delights of the market place. I’m fond of food stalls and I’ve been fortunate enough to visit many all over the world. Those in south east Asia are remarkable, and Vietnam is something else again. One assumes an air of superiority after time, through one’s ability to recognise much of the strange produce. That can result in humiliation, of course, when one commits the schoolboy howler of mistaking a longan for a lychee. Doh! 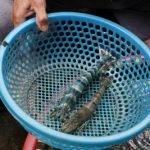 Fascinating though the fruit and veg may be, the frisson, nay the shock of the new, really kicks in when you get to meat and fish. I spent time during the holiday reading Max Hastings’ excellent account of the Vietnam conflicts from 1945 to 1975. In his book he comments that while the Vietnamese show love and compassion to all children, they have an appalling disregard for animals. In most eastern markets there is a terrifying lack of refrigeration; however, with very few exceptions, all the fish and shellfish are still alive when you buy them. If the turquoise striped prawns are dead, it’s because they have just been shelled, alive, in front of you. We saw a lady struggling to scale a large fish, the struggle attributable to its attempts to escape her clutches. At the next stall we saw its cousin gasping for breath. No attempt was being made to escape, as the back half had been neatly chopped off, wrapped in newspaper and sold. 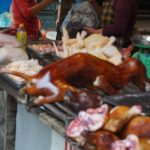 Buying meat really does present a challenge. Unless you’re experienced enough to be able to recognise what’s fresh and what isn’t, it’s not a game for the faint hearted. Go early, to know that your purchase hasn’t been sitting out in temperatures in excess of 30˚C. In Hanoi, my eye was caught by a glazed suckling pig. Closer inspection revealed tail and teeth which were most unporcine. Woof, woof.

I mentioned this to our guide in the south. Oh, they eat dog only in the north, he said disparagingly, while pointing out small cages full of rats in roadside shops. A special treat for the barbecue, apparently. And, in fairness, these were country rats, not those living on urban filth.

But who the hell are we to judge? One of our guides in the Mekong Delta was born in the last year of the war. His memories of growing up are of permanent hunger, a staple diet of tapioca, and the constant search for anything edible. He had clearly been affected by rickets as a child. The pace of development in Vietnam is fast. I urge you to go now, to enjoy the beauty of the countryside, the warmth of the people and the terrific food. And if you do go food market shopping, don’t say I didn’t warn you.