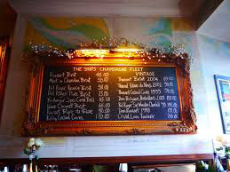 They have long memories in these parts. There will be Leithers alive whose ancestors have denounced to them the appalling annexation by Edinburgh in 1920, Leith having been a separate burgh up to that date. In much the same way that Churchill was hated by many, so some Leith historians will forever curse Scottish hero Robert the Bruce for his Charter of 1329 giving Edinburgh control of their docks. Have a look at photos of this area from the 1980s and, superficially, nothing has changed. Indeed, any picture from 100 years earlier would show a pub called The Ship on the site of today’s feast.

But go beyond the superficial, and things are very different. Pubs such as Nobles and The King’s Wark have moved from being haunts of ladies of, shall we say, dubious virtue to gastropubs; top quality chefs such as Martin Wishart and Tom Kitchin have moved in; and, generally the whole area has become something of a foodie paradise. Murray and Tracey Georgeson have been at the heart of this since taking over here in 2007. Well spoken of since the start, judging by old reviews, The Ship on the Shore was boosted by a half million cash injection last year. It must be said that the old girl is currently very well turned out.

This was a lunch with CA and XPA, the venue suggested by the former as a favourite of his. We could have gone at almost any time of day. Breakfasts are served from 9 – 1130, lunch from 12 – 5, and dinner from 5 – 10. The website modestly describes the place as the seafood capital of Edinburgh and the emphasis is very firmly on fish. At lunchtime the menu takes a long time to study. One page is devoted to oyster combinations, another to fish platters at prices ranging from £20 - £130, the latter, obviously, for sharing. You can have plates of langoustines, a small range of salads and sandwiches and, on Sundays, traditional roast beef. Phew!

Haggis spring rolls were well received as was the sea bass, served off the bone as requested with “Ship’s puttanesca”, a spicy sauce with a nod, perhaps, to some of the Leith ladies of years gone by. I had the hot and cold oyster selection. £3 a pop is probably about par for an oyster in Edinburgh, but it has to be said these were gey wee specimens. The cold ones worked better, one each of natural, Bloody Mary and, best of all, chilli and ginger. With one exception, the hot (or to be accurate, warm) ones were OK, but I only have their word that there really was an oyster inside the claggy pakora batter. Salmon in filo was very good indeed, with Hollandaise sauce and (the ultimate test for a fish restaurant) excellent chips. A main course of crab was the only disappointment, the flavours being masked, not enhanced, by a mixture of crème fraiche, red onion and chives.

As I mentioned, I checked some reviews from earlier in the decade. Many of these described the prices as being very keen. I raised my eyebrows at that. Fish is not the cheapest of dishes and an investment of £500,000 does have to be recouped, but even so... Some of the pricing seems anomalous. For example, there is an offer of 6 plain oysters and a glass of champagne for £20: that’s great, but if you want the same oysters in a tempura batter, the price goes up to £28. At dinner here, fish and chips apart, there are no main dishes under £23. At these rates you really are entitled to expect something special, and I don’t think they deliver that. Staff were all smiley and pleasant, but there were a few issues.

Not for the first time I have the critic’s dilemma, namely to analyse in retrospect the food and service provided at a meal which has been overall a thoroughly enjoyable afternoon with good friends. If fish lovers are asking for a recommendation from half a dozen of the city’s best known places, I’m not sure The Ship would be on the podium, pleasant though it was.