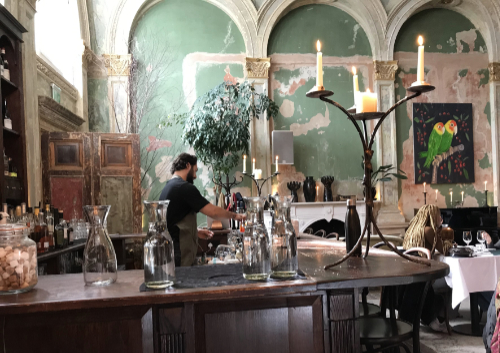 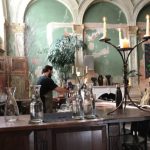 What's in a name, eh? This place isn't a club. Sessions? More of that later, but when you're lunching with the Former Brewing Giant it does tend to become a session. Arts? No idea why that crept into the title, but the walls of the cavernous dining room are covered with a lot of funky art stuff.

Did I say funky? Well, why not? Reach for your thesaurus and apply your own adjective of choice according to your chosen decade. Here, in mine, Ziggy Stardust is meeting the Spiders from Mars; Johnny the Fox is meeting Jimmy the Weed; and Florence Knight is meeting Jonny Gent.

You didn't get that last reference? That's because I fast forwarded to 2021. Who in their right mind would open a restaurant in 2021? Jonny Gent (can you get a more rock and roll name than that?) that's who. And with a stroke of pure, mad genius, Florence Knight is recruited as chef. She made her name with Russell Howard's Polpetto. (Technically, I suppose, her name was made by her folks, but it's not a day for pedantry when there is so much to celebrate.) 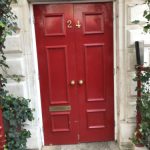 The one sensible part of the name, oddly, is the Sessions part. This elegant 18th century building in Clerkenwell was once home to the Middlesex Sessions Court. Some might say that the initial welcome isn't of the warmest. Reconnoitering the place half an hour in advance of the appointed time, we found no sign, just a small red door which appeared to be locked. You have to ring the bell. And when you do, you're met by a couple of lovely folk who direct you to a lift, which was probably installed when the court was built. It creaks you up to the fourth floor, where delights await.

I had heard that the restaurant once housed the judges' dining room. I have my doubts. I've been in enough court rooms in my time to recognise the scale, layout and dimensions. Why on earth would you have a viewing gallery in a dining room? To watch a judge toying with a Dover sole and shout, off with its head? Its current incarnation sees the room festooned with all sorts of mural art. Go up to the former viewing gallery and you are lead to a maze of outside terraces whence you can admire Clerkenwell or, preferably, the glories of the building 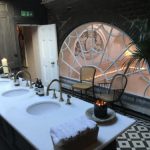 itself. I may have been in a more elegant loo in my time - I just can't remember when.

The menu is one of these lists of plates where you have to guess the size according to the price. I quite like this, as it makes sharing easier, but I know it's not everyone's cup of masala chai. To make ordering easier we scribbled on the painted menu, with the approval, I should add, of Husni, he of Sligo via Dublin. Was he the finest server in the house? I doubt it, as you would give 5/5 to every single one of them. Come here and you're in a happy place.

The FBG said he had chosen the venue because of a review he'd read. (By Grace Dent, I think.) FIVE POUNDS FOR A SINGLE CROQUETTE! But Grace thought it was worth it, and so did we. Hers was crab, ours shrimp. Crustacean loveliness bursting with butter, Kiev style.

Reviewing the menu I see I've forgotten much of the detail, but have simply recalled the overall sense of wonderfulness, if that's a word. Pane carasau (a Sicilian flatbread), cicoria and bottarga - sensational: beetroot, tomato and ricotta - simple, seasonal, stunning: friggitelli, cannellini and chard - can't remember, but I think it was bloody good.

When I see eel on a menu I'm attracted to it, Sargasso like, but I know for many it has the opposite effect. This came in a sort of mille feuille and would have converted more than many an apostle. But much as I loved that, the prize has to go to the Sea Trout, Ratte & Watercress. Stunning fish, a potato base, and the sort of green gloop that made you want to lick the plate at the end.

There's more. This may astonish you, gentle reader, but three puddings were ordered and consumed. Why don't I eat more puds when I'm out?  I like rice pudding: L hates it. The FBG enjoyed his. I had a spoonful. Served cold. So so for me. After a 6/10, two 10s from the judges. A chocolate tart which was light but intense, and a plum and grappa granita from which both of the advertised flavours burst through the cold.

I recall a song about a green door. Head down here, find the red door, bang hard and demand admittance.