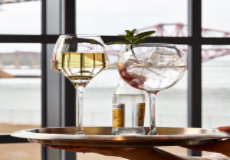 There once lived in Fife a culinary magician named Hamish Wright. Those who have never heard of him may assume from that description that he was some sort of wizard chef. I have no idea whether the man could even boil an egg. Where his extraordinary talent lay was in knowing precisely what his public wanted, and what price they were willing and able to pay.

I know not whether the Blair family who run Buzzworks, owners of these two places (plus another nine), had any knowledge of Hamish Wright, but their DNA contains the same genius. The Scotts brand has been well established in the west of Scotland for years now. 2018 saw them opening their first venture in the east.

I have written about Troon before. South Queensferry had been on the list for quite a while – it’s getting a table which is a problem. We turned up on spec one Monday in January – choc a bloc. Saturday lunch? Book a good few weeks in advance. Eventually a tryst was arranged, and a diary entry made back in about May. In the meantime we visited cheery chums in Troon, having left it to them to select the venue for the Tom Eats! jaunt. Thus I found myself with two Scotts dinners in a week. 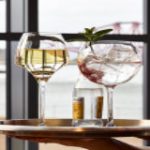 There is a formula of sorts. The menus in both venues are very similar. What they also have in common is that most people, myself included, would happily scoff just about everything on the lists. Both are all day places, with breakfast available from 0830 (till 1130 in Troon, 1200 in South Queensferry). Confusingly the South Queensferry website gives the address as Edinburgh. Prices are a little higher in the east, although in Troon you have the option of the slightly more expensive Pride of Ayrshire steak selection. There is no premium equivalent in SQ. A basic Caesar Salad is £5.95 in Troon, £10.95 in SQ. Otherwise things are broadly consistent.

It is interesting to rework the planning processes which have gone into creating these two restaurants. Firstly, venue. If you can’t make something appealing at a marina (and, it must be said, many have failed) there really is something wrong. In Troon you look over the water (I have no idea when a marina became a “haven”) with views of Ailsa Craig. That, however, is trumped in the east by the stunning views of the three bridges, the restaurant having been designed to get the best out of the panorama. There will have been a canny eye to the competition. Were this indeed in Edinburgh, there would be a lot of places with a similar offering. In South Queensferry there are a few other venues, mostly living on their (not terribly impressive) reputations. We went to one such when our original quest to Scotts was foiled by it being mobbed. That competitor was nearly empty, sad, and not very good. Staff in both restaurants are pretty well trained, although each place would benefit from better supervision. I found the service to be (in the main) efficient, but regimented rather than friendly. It is no surprise to report that the west scored slightly higher than the east.

Over the two nights we sampled a fair range of things. Most fell into the description of not bad, not great. In that category there were calamari, mixed tempura, prawn cocktail, and a trio of seafood. Garlic Crusted Chicken was fine; however, it was advertised as coming with crispy potatoes. Tell chef that potatoes lose their crispness if you swamp them with red wine gravy. Those taking the superfood salad commented that it would be an excellent choice for those with no teeth. I had to look up Chicken Katsu. It’s originally a Japanese dish, a crispy chicken cutlet, usually served with Tonkatsu sauce, which is a mixture of tomato ketchup, Worcester and soy sauces, garlic, ginger and herbs. What arrived was a piece of chicken with a basic curry sauce. Again, not bad, not great. Special mention must be made of the monkfish and tiger prawn Thai style curry, which was exceptional. A chef talented enough to produce this could perhaps raise his or her game a little with some of the other dishes.

But does anyone care? I think not. In each case we saw a restaurant stuffed full of happy diners, enjoying themselves, having a good night out. And at the end of it, isn’t that what eating out is for?

I’ve given the price ranges for both places although they are very similar. Of the two, I would say that South Queensferry edges it because of the view and the slightly better cooking; however, the service in Troon was better. When it comes to the score, I’m not going to split them. Where there might be a divergence, I’ve rounded it up. Good luck getting a table.