For the last Tom Cooks! of the year, let’s end up with a sumptuous show stopper of a dish, one which will grace the table of a festive, or indeed any other, party. This features choux pastry, almonds and a rich filling of praline cream. This recipe is from the uber talented Sarah Mellersh of Let’s Cook Scotland. I ate an individual version of this in Paris a couple of weeks ago (see Tom Eats!, Champeaux), which brought it to mind. (Hate to tell you Champeaux chaps, but Sarah’s is better.)  This is not a dessert for beginners. I have made it, but I had a lot of help. My version is pictured top left, with a more sophisticated example next to it.

Why is it called Paris Brest, you cry? I’m so glad you asked. In the early part of the twentieth century, endurance cycling was hugely popular in France. Rival newspapers, most notably Le Vélo and L’Auto, vied with each other for circulation, promoting cycle races to boost their popularity. The Tour de France was established in 1903. Prior to that, one of the most popular competitions was the Paris-Brest, a 1200 kilometre jaunt from Paris to Brest – and back again. Some say today’s concoction was invented by a pastry chef whose shop lay on the route. Other sources attribute this to a master patissier Louis Durand, and date it from 1910. The shape is round, symbolising a bicycle wheel. 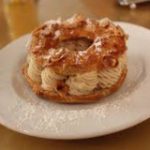 You will need a piping bag with a nozzle about 1.5cm for the choux pastry.

For the choux pastry

Begin by making the praline. Line a baking tin with baking parchment. Put the nuts and sugar in a heavy bottomed pan and stir together. Set together over a gentle heat. DO NOT STIR AT THIS STAGE. Leave until the sugar dissolves and the mixture turns a dark amber colour. Remove from the heat and pour evenly over the baking sheet and leave to cool completely. Once fully cooled, break up the pieces and blitz to a powder in a food processor. Set to one side until needed.

TOP TIP – To clean the pan, fill  with boiling water to remove the residual caramel. As ever, when making caramel, be extra careful and keep others out of the kitchen. Molten sugar can cause horrendous burns.

To make the pastry, sift the flour into a bowl. Put the butter and water into a saucepan. Heat gently until the butter has melted. Then bring to the boil, remove from the heat and add all the flour at once. Beat with a wooden spoon until the dough can leave the sides of the pan and form a ball. This needs a LOT of beating. Then return the pan to a medium heat and stir continuously for another 2 minutes. The dough should glisten slightly. Tip into a bowl and allow to cool slightly. Beat the eggs into the dough a little at a time, reserving a little of the beaten egg to glaze just before baking. Your mixture should be very shiny and should just drop from the spoon.

Line a baking sheet with greaseproof paper. To guide you, draw a 15cm circle on it (use a plate of the correct size). Turn it over, so you can still see your circle, to avoid putting your dough on the ink. Put the dough in a piping bag. Pipe in a circle following the outside of the line, with a concentric circle outside that it. If you have any dough left fill in the space between the two circles. Smooth out the joins with a knife. Brush the remaining egg over the dough. Sprinkle generously with the flaked almonds, and place in the oven for 10 minutes.

Turn the heat down to 180°C/Mark 4 and cook for a further 30 minutes. Remove from the oven on to a wire rack. Immediately cut in half horizontally to remove the steam. (When making any type of choux pastry, whether eclairs, profiteroles, or whatever, always pierce immediately you remove it from the oven.) If the halves are still soft and doughy return to the oven for a few more minutes to dry out. Leave in two halves to cool completely. While the pastry is cooling, make the filling. 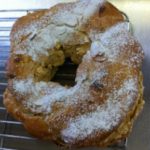 Whip the cream until thick. Add the vanilla extract if using. Thoroughly fold in the ground praline. If you’re being very cheffy you would pipe the cream on to the lower layer of the pastry (see photo, above right). Otherwise just spread the cream over. Place the upper part (that’s the bit with the almonds, remember) on top, and dust with icing sugar.