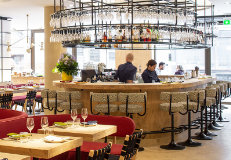 For many years, food columnists would write about the so called Delia effect. If the good Ms Smith featured a particular product, it would fly off the shelves. Over the last decade or so, it is more likely to be Yottam Ottolenghi we have to thank for a seismic shift in our use of ingredients. Ten years ago, how many of us had heard of pomegranate molasses, sumac or za’atar, let alone knew where to find them? Yet today they are on the shelves of most supermarkets, and are staples in many domestic kitchens. One can now delve into any of the great man’s excellent cookery books without being baffled by the contents.

He has now established a small chain of restaurants in the hipper parts of London, all providing excellent fare, albeit to a fairly standard style. There are clean lines, bowls of salads with big, punchy flavours, and ever changing mains with something for everyone. Eight years ago he moved into the higher end with the opening of NOPI (North of Piccadilly). His latest venture is ROVI (as in Fitzrovia). Ignore the clunky naming – everything else about this is smooth and assured. The menu, however, will return you to the state of ingredient ignorance you found yourself in all those years ago. Ponder, for example, galotyri, kosho, khao khua and boshi. I’ll forgive anyone for thinking the former is Doctor Who’s home planet, as opposed to a sheep’s milk cheese, one of the oldest known dairy recipes in the world. The others are, respectively, a Japanese condiment combining the flavour of yuzu with chilli heat; toasted rice powder; and a character in Super Mario. No, really, and also a name for a court academic in the time of the Han Dynasty. But boshi as a food stuff? Not a clue.

I suggest you ignore the distractions and just plunge into this wonderfully diverse and eccentric menu. It’s a mixture of small and large plates, which makes getting the right amount of food tricky. I counsel you to over order – it’s all terrific. If you wish to criticise me for being unable to categorise the cuisine style, I present you with Exhibit A, Carrot Jerky, an ingenious combination of slow cooked carrot and some Caribbean heat, served, of course, with smoked labneh and gooseberry boshi. Incomprehensible but wonderful. Lobster Crumpet came with kumquat and chilli sauce, as you would expect, and the aforesaid galotyri made an excellent match with some violet artichokes and olives. Our one large plate, a Jerusalem mixed grill, had chunks of heart and liver, with onions and pickles and tahini. They do a lot of pickling and fermenting here. To be honest, even with the ingredients listed on the menu, you never quite know what to expect. A simple veg such as purple sprouting broccoli had a crunch of peanuts and some wonderful seasoning, which I now know to be kurikake, a Japanese mixture of dried fish, sesame seeds, chopped seaweed, sugar, salt, and monosodium glutamate.

I don’t usually mention wine lists, but it’s difficult to ignore a wine with your name on it. Sadly, the Austrian Waiting for Tom was out of stock, so we chose something else, at Fitzrovia prices, of course.

The place really buzzes, in a good way. The uniqueness of the food has everyone comparing notes with their neighbours, and examining passing plates to make sure they’re not missing out. Ally this to as lovely a bunch of staff has you can hope to find, and it makes for a fantastic atmosphere. Even the manager himself came to chat. Only after a couple of minutes did we realise he was gently telling us he needed the table back. Now we were offered alternative accommodation in the bar, but 90 minutes at dinner time seemed a little mean. Next time, we’ll probably book for an earlier time, and specify we want at least two hours.

That really is the only minor nit which I can find to pick. If you’re looking for meat and two veg, ROVI is not for you; however, if you have any hint of adventure in your foody soul, get along there and be amazed.