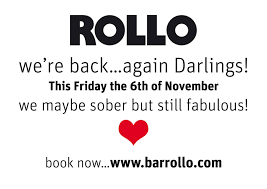 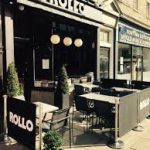 It was a chance meeting on the Water of Leith walk which brought me here, reminding me that I had never reviewed it. I've been in both Rollos on many occasions. Today I'm in the original in Stockbridge. I read that this little beauty was born in 2013. Her near identical sister in Broughton Street arrived a few years later. Owner Ailsa presides over both with panache. Her trademark greeting of hello, darling! has become a catchphrase for the whole organisation - even the bottles of hand sanitiser are labelled, rub a dub dub, darling. Some find it irritating or affected: I love it, and it always raises a smile. People who understand hospitality do that.

For years now I was certain that Ailsa had been cloned. Whichever establishment I visited, she would always be there. She was previously a fashion designer; mum is a sculptor, and dad is an architect. These go a long way to describe the dark, stylish interiors. Depending upon which part of the website you read these might be described as hip, intimate or quirky. I really should dislike it, because it's so many things that I'm not, namely elegant and cool. The first time I went there, for an afternoon glass after some Stockbridge shopping, I commented on Ailsa's sparkly top. Friday night, darling, she said, with a wicked smile. It's no surprise that the brand of the hand lotion in the loos is named Mischief. 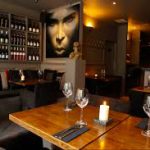 The food is identical in both places. The menu is divided into four main sections, entitled Bites, Bowls, Plates and Sides. People of normal appetites won't have room for Puddings. It reads attractively, though there is a bit of an emphasis on frying, and as far as I can see it doesn't vary. Considering the location and the style of the place, I would have expected more for the trim ladies-who-lunch brigade. Then it dawned on me. I don't think anything in this whole set up has been done without careful consideration. There is far more profit to be made from trencher folk who want two or three courses and a bottle of wine, than from a couple of girls picking at a salad washed down with Highland Spring.

We started with a baba ganoush which packed less of a punch than expected. It came with addictive, slightly salty shards of toasted or fried flat bread. We refused to allow the plates to be cleared until we had scoffed them. I've commented on the frying, but if it's all done as well as the grease free cauliflower and onion pakora, you're in safe hands. These packed a load of garlic and the right amount of heat. And forget your typical sad, sweet accompanying chilli dip. They came with a wonderful sauce (a hummus base, I think, with blitzed lime pickle) and a mini salsa of the most finely chopped cucumber and other things. All home made I was assured.

If these were good, the main courses were a triumph. Don't be fooled into thinking that the slow roast lamb salad might be for the LWL brigade. It came with feta and mint and red onion and roast pepper in a generous bowl of rocket, all bound together with a perfect lemon dressing. The plate of pork belly with a little tower of food on the side (roast apple topped with celeriac slaw) may not have looked a lot; however, what both dishes had in common was that after we had been eating steadily for a good while, our plates seemed to be fuller. The pork had a nicely crunchy top (and I speak as one who is not over fond of crackling) and the apple and slaw cut through the inevitable fattiness of the meat and the beautifully reduced sauce. We really didn't need the home made chips with aioli, but that didn't stop us scoffing the lot.

Pudding: no chance, though I did observe plates of sticky toffee pudding and banana custard bread and butter pudding disappearing faster than was wise. We contented ourselves with good coffee. I was glad we were able to retrace our steps along the Water of Leith for a few miles to aid digestion.

For the first time in my experience Ailsa was in absentia. How does service in Rollo fare in her absence? Very well is the simple answer. Some might comment on the decidedly minimal face masks - they look like Hannibal Lecter's mouth guards - but a lot of money has been spent on protection. As with many modern tills, the bill tells you who served you, or, to quote them, your Clerk. If Ailsa is on your table, it will say Big Boss Lady. We were apparently looked after (and looked after with great aplomb) by Captain Fancy Pants.

Prices for me are pretty keen. The most expensive dishes are on the menu come in at £14.50, for fillet of beef, or scallops. Be warned that the sides can seem a bit dear by comparison. A mixture of bok choy and peppers is £7, and a broccoli and cheese crumble is £7.50. But, to be frank, you don't need them.

Even in these hellish times for the restaurant trade they serve you with style. A range of alcohol free drinks is on offer, but no attempt is made to plug them and they are happy to keep your glass filled up with tap water - profit margin zero. I was pleased to see the place was packed on a Wednesday lunchtime. My advice to you, darlings? If things are getting you down, book a table here, where you have the guarantee of being fed well, served well and coming out with a smile on your face.