This column has considered the pineapple before, but a couple of things brought it to mind recently. Costa Rica, whence we have just returned is the world’s largest pineapple producer. The quality, when you are eating a fruit picked when ripe, as opposed to harvested early to off set a long journey across the world, is superlative. And secondly, at Tom Kitchin’s excellent Southside Scran, the rotisserie, the supposed USP, held nothing but a solitary pineapple, spinning gently in golden perfection.

Cored, cubed and eaten on its own or with ice cream, it is hard to surpass the flavour of a fruit which is sweet and sharp at the same time. But there are times when you need little swank. And if you have a fruit which isn’t as sweet as you anticipated, cooking it can be an enhancement. There are many fruits which are improved by the addition of sweetness and heat: I’ve dug out a couple of examples. I think it was Marco Pierre White who was first credited with roasting a pineapple with chilli. Many fruit and veg seem to work best with other things which are produced nearby. Pineapple is a great example. Rum, chilli, and pepper all complement it. The Chinese star anise is the exception which proves the rule. 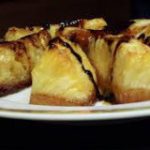 Preheat the oven to 180°C/Mark 4. In a heavy roasting tin sprinkle the sugar, chilli and pepper if using. Roll the pineapple in the mixture. Cut the butter into small pieces and dot over the top. Bake in the oven for about 30 minutes, basting every 10 minutes, until the fruit is golden coloured and sticky. Make sure you don’t allow it to burn. Allow to cool slightly the serve with a light sprinkling of extra chilli and pepper. This would go well with crème fraiche spiked with dark rum, or just ice cream.

Sprinkle the sugar in a heavy frying pan. Add the pineapple slices and the star anise, and cook over a medium heat until the sugar starts to caramelise. It needs to be a chestnut brown colour. Any less and the mixture will be sugary; any more, and it will turn bitter. When the colour starts to change it does so very quickly. Add 100ml of the rum and flambé. It’s spectacular, but do take care. A combination of caramel and flame can cause extreme pain. Allow to bubble until the mixture turns syrupy. Add the butter and water. Simmer for 7 – 8 minutes, turning once. The liquid should by now be a thick syrup. Add the remaining rum and bubble for a few more minutes to thicken. Leave to cool slightly for a few minutes before serving. Plain vanilla ice cream is probably best to go with this.