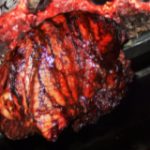 From time to time I have mused idly as to why we talk today of roasting beef in an oven, yet baking potatoes. The latter term is correct. Traditionally roasting is done by exposing food to a naked flame, either on a spit or grill. Until watching a recent BBC programme on the history of the railways, I had given the matter no more thought.

I was brought up in a mining area. Everyone I knew used coal as the principal fuel. Electric cookers were becoming more common; however our (comfortable middle class) home had a coal fired Rayburn. We were incredibly posh having central heating, but that too was fuelled by coal, by means of a bad tempered boiler located in an outbuilding. If the central heating boiler went out on a freezing February night we children might learn some new words. 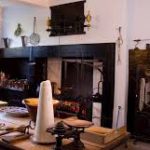 But for centuries before coal became king the principal fuel (the highlands of Scotland excepted) would be wood. Go to Scotland’s stately homes or Georgian town houses. The Georgian House in Edinburgh’s Charlotte Square, dating from 1796 is one of the most interesting. And of all its beautifully restored rooms, perhaps unsurprisingly, the kitchen is my favourite. In those days you roasted your beef in front of an open fire. Originally some unfortunate child would have the pitiless task of rotating it by hand for hours. Then engineers started to apply their ingenuity. Spits began to be powered by clockwork or convection, and one ghastly task was removed. The child was probably freed up to sweep chimneys instead.

And relatively soon it would be coal dust and soot to be swept out. According to the BBC, as soon as your town or city was connected by rail, the price of coal fell by at least 30%, making its use a no brainer. Now if you haven’t made the roast beef connection yet, don’t berate yourself. I didn’t click until Ruth Whats-her-name who does all these historical things pointed it out. Roast your beef over wood and the smoke will impart a delicious flavour into the fat: do the same over coal and you will have a blackened disgusting mess. 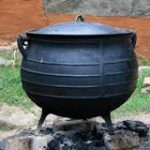 Thus was born the modern oven, and pots and pans as we know them know. The traditional utensil for cooking over a wood fire is the cauldron shaped pot, either hanging by a chain or on legs. Cast iron probably. A good one could last for hundreds of years. The flames from a hearty wood fire licked up around the cauldron: coal fires were less obliging. This in turn led to the flat ranges as we know them now, requiring flat bottomed pans which typically might have a life expectancy of 20 years or thereabouts.

So the railways killed traditionally cooked roast beef, but were very good news for pot manufacturers.