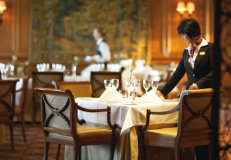 Centuries ago, St Andrews was a destination for pilgrims. Those coming from south of the Forth would take the ferry from North Berwick to Earlsferry, once a burgh in its own right, now part of Elie. Go down Ferry Road at low tide and look into the water. You can still see a horseshoe of stones, all that remains of the harbour.

For the best part of 20 years L and I have been making our own annual pilgrimage to St Andrews. Not in summer – a Scottish seaside will always disappoint you then - but in early spring. The buffeting you receive during a walk along the West Sands (of Chariots of Fire fame) not only freshens you up and tones your skin, it makes you feel you’ve earned a hearty dinner.

But where? We’ve eaten in many of the places St Andrews has to offer. This year we decided to stay in and try our luck at the Old Course Hotel. Their principal restaurant is the Road Hole, named for the famous 17th hole on the Old Course itself, which, by day, you see below you. By night the vista is equally stunning, over the floodlit Royal & Ancient Clubhouse and its neighbour, Hamilton Hall. The latter building dwarfs the former, as was the intention of developer Thomas Hamilton who erected it after his application to join the R & A had been rejected.

The proceedings began confusingly. We were given a market menu with no prices, then another menu with no prices but a list of supplementary costs. For people on an inclusive DB& B package, apparently. No thanks, normal menus for us, please. My eyebrows raised slightly when I noticed a dish on the a la carte menu – pheasant breast - for £26.50, which would have attracted a supplement of £18 on the first menu.

If we had started with a glitch, the meal began with a car crash. There is nothing good to say about my pigeon starter. Pigeon must be served pink, otherwise it tastes of liver. Cooking it quickly, with a nice sear, gives the added advantage of a tasty crust. A normal size breast needs no more than three minutes at a high heat. You may have noted the use of the adjectives pink, tasty and nice. We began with a score of 0/3 as I sawed through a sad, dark on the outside, grey in the middle, thing. Astonishing to believe it once had life and wings. This would have provided excellent propaganda for the vegan cause. It came with a couple of slices of crispy but unbelievably salty pancetta. There were also large balls of some sort of rock hard pickled veg. I escaped with all my teeth intact, but only just. As bad a dish as you could hope to avoid.

Now here’s the really odd thing. Every other plate we were served was not merely good, but borderline stunning. A soufflé made with Anster cheese was a twice baked version. Delicious. The pickled veg on the side here (beetroot) was much better. Main courses continued the ascent. Venison loin had been home smoked, lightly. It came with a rosti of root veg, roasted artichoke and red cabbage purée. The let’s play with potato alternatives mantra continued with the duck. A generous helping of breast meat was served with a pastilla (a Moroccan style pastry cigar) stuffed with leg meat. I have never had (or even thought of) a dauphinoise made from carrot. An inspired idea, bringing sweetness and colour to the plate. It’s always good to see salsify on the side, and the whole thing was drizzled with a glorious thyme infused jus. I was almost ready to forgive them their pigeon sins.

Absolution had to be granted after dessert. Another soufflé, this time of the conventional variety. That shows a kitchen which does not lack confidence. The plate was a masterpiece of orange and ginger, the soufflé flavoured with mandarin and Cointreau. There was more orange in the form of a gel, while ginger came in the form of ice cream and some cubes of pain d’épices (posh gingerbread). There were some other crumbly crunchy bits, but L and I were too busy fighting for our share to have much time for analysis. Never mind the X factor – this had wow.

I’m just at a loss to understand the one aberration. That poor old pigeon shouldn’t have been put on a plate and certainly shouldn’t have made it across the pass. I think the simplest way of dealing with it is to deduct a point from the cooking score and move on. Coincidentally, this dinner mirrored our experiences staying in the hotel itself. So much excellence, but some infuriating inconsistency.