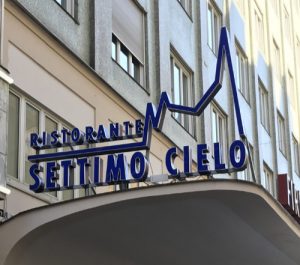 Muted. In a city of art and music, that's an adjective one might find often. A quiet interval, say, before a great passage of brio and forte. Or a lower range of colouring - the perfect word to describe Rembrandt's palette in the Kunthistoriches Museum. 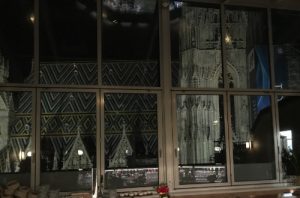 And undoubtedly the right word to describe the decor here. Take the lift to the tenth floor of the Royal Hotel. Before you are struck by the so-close-you-could-touch-it view of the roof of the Stephansdom, the majestic cathedral which dominates the city, you are impacted by the muted 1980s decor, and the whispering brown of the terrace dining room. The staff contribute, moving efficiently, but very quietly. Communication is to a minimum, and pianisssimo.

It is this rather than the take-you-back-40 years ambience which strikes me. I don't think it's of the staff's doing, just that management prefers an aura of hushed Teutonic-like efficiency. As one who prefers to be able to engage with waiters and waitresses, I find it a little soulless.

Menus are brought promptly, as is a basket of bread of all sorts. The only problem is that it's not of the freshest, having neither smell nor flavour. This in a city with multitudinous bakers' shops open at least twelve hours a day. Are you getting the impression that I'm a little underwhelmed?

Then the heavens opened. Lo! there was colour and light and sound - the starters arrived. An excellent tartare of salmon trout with the usual sort of stuff; an ingenious trio of cauliflower, with crunch and flavour. But it gets better. Three large ravioli stuffed with Italian salsiccia on a plate with tomatoes, pepper and spring onion, brought together with a chilli infused chicken stock based broth. The latter was so good you could drink it. I know, because they left the pot on the table and I did. But the crescendo was reserved for the beetroot risotto. A thing of wonder in its own right, spiked with horseradish and topped with a scallop or two. The crowning glory was added with a few jewels of pomegranate seeds. Goodness me! The world was suddenly a brighter place.

For the meat eater there was nothing wrong with the choice - duck, pork or venison; however, you couldn't have beef unless you persuaded someone to share. Eldest daughter R, now resident of this parish, was in carnivorous mood, and I was prevailed upon to share the rump steak for two. A perfectly cooked slab was presented then taken away for carving. You expect 70 odd euros of beef to come well garnished, but things took an odd turn. A plate of brussels sprouts saw them cut in half width ways. If a score of 1 is raw, and 5 is al dente, these were a 1.5. Inedible. I am the world's greatest fan of neither gnocchi nor truffles, so I was pleasantly surprised by the end result, just enough fungus grated on to make the dish interesting but not overpowering. The beef itself? Perfectly good, with an expertly made gravy. But hey, Vienna, you're not going to impress a Scot with the quality of Austrian beef.

T, R's other half, and L shared a whole sea bass cooked in a salt crust. A bit of theatre here, the dish arriving at table with the crust alight, Christmas pudding style. No idea how you do that, but a bit of fun. The waiting efficiency was a little lacking when it came to serving the beast. Never mind - it was superlatively good fish. What I did mind was the stipulation that you could have salad OR potatoes. At 69 euros for a fish, that's just mean, no matter how good the salad was. In summary, I could feel the room closing in again. T's pudding raised the horizon a little. A curd cheese dumpling with plum and yoghurt was a light and clever take on middle European flavours, if a little heavy on the cinnamon for L's taste. I admired it a lot.

It wasn't late - we were out of the place by 10 - but in the last half hour we were very aware of the efficiency of the service in tidying up and setting up for the next day. But the efficiency didn't extend to the wine being topped up without our having to ask.. No, I'm not being prissy, and I'm more than happy to fill my own glass, but if you store the bottle out of reach, that's another essential task.

Now, the young 'uns loved it, though with a three year old they don't get much opportunity for a bit of luxury dining. Am I just being a grumpy old sod? Having consulted this column's regular editor and moderator, I think not. Would I recommend this place? Sadly, no.