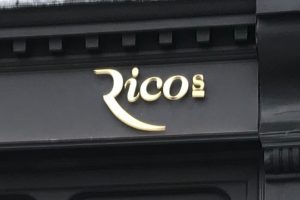 Here's a Q and A in reverse order.

A   Because it used to be a false teeth factory.

Q   Why does a main door restaurant in Edinburgh's New Town have the address 58A?

Read the myriad of publicity about the opening of Stefano Pieraccini's new (but not his latest) venture in Edinburgh, and you will learn that it was until recently Martin Wishart's The Honours. I think Tony Singh was there for a while before that, but for me and many of my generation with fond and wistful memories it will forever be remembered as the site of Cosmo's. His original place comprised only the southern half of the present establishment. The northern part, where the bar is now, was acquired later and the use changed, to the great delight of patrons and, probably, gnashing of teeth among the dental community.

If you are even an occasional student of the Scottish hospitality scene, you will be familiar with the name Pieraccini. Mum and Dad built up quite an empire, latterly in Inverness. I was sad to see that Adriano died recently at the horribly early age of 60. Stefano was just 22 when he took over the Seafood Ristorante, the glass cube overlooking the water in St Andrews. Subsequent acquisitions in Edinburgh have included The West Room in Queensferry Street, and The Broughton in Broughton Street.

This place opened in July. At the same time he must have been working on Rico's Pasta Bar,  newly arrived in the Bonnie & Wild Food Court in Edinburgh's St James Quarter. Occasionally we just turn up at review venues on spec; on other days we may book at very short notice. Given the long history here, not only was it given the Saturday treat treatment, we even dressed up a bit. Entering was like a step back in time. Elegant staff, broad smiles, welcome. When we moved to the dining room, things changed a little. Friendly enough, but with a stiffness. In fairness, they've been open only for a few weeks. Perhaps they'll loosen up a bit. 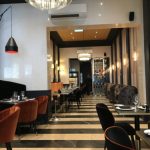 I don't remember the room from the Martin Wishart days. Not much you can do with a fairly narrow rectangle, but there is now a pleasing modern elegance. Bread was brought promptly. I wish they hadn't. Sun-dried tomato rolls were stale. The introduction to the other included the word sourdough. That's akin to Rick Blaine moving to Casablanca for the waters. (You will recall he admitted he was mistaken.) It was a sort of cake texture, vaguely focacccia-like, but every drop of oil had permeated to the bottom, like a damp sponge. Not a good start, ragazzi e ragazze.

At lunchtime you can choose between the a la carte or a short table d'hote at the astonishingly reasonable price of £23 for 3 courses. We tried both. Organic bresaola was excellent. From Peelham Farm, so no surprise there. But the dressing on the accompanying rocket was also worthy of a mention. Tagliatelle al Granchio worked very well indeed. Wonderful fresh pasta. This comment from one who generally prefers the dried stuff. I'm fairly sure the pasta was made on the premises. There was plenty of the advertised crab, plus tiny balls of courgette, and baby plum tomatoes. The only eyebrow raiser was the price (£20). Now to be fair, you either pay a lot in cash for ready prepared crabmeat, or in labour costs to extract it (and ensure it's shell free). But before I get too fair, the basic staple of ravioli with spinach and ricotta will cost you 18 quid.

It is a fact of life that of Vivaldi's Four Seasons, the most commonly played by far is Spring. So I care not a jot about a Risotto Primavera (Spring), being served in late August. Despite the presence of Cora Linn cheese, the summer veg gave this an unexpected lightness for a rice dish. The previous evening I had made a saltimbocca. It was not one of my finest dishes, so I decided to try the chicken version here. Chicken breast was stuffed with sage (and something else, but I'm not sure what) and tightly rolled, ballontine like, in excellent San Daniele ham. With a terrific mushroom purée and a few peas and beans this was very fine cooking. For some reason I'm always attracted to the Italian oven roasted potatoes with rosemary. I'm also disappointed on a regular basis, as they are usually textureless, lacking the promised crunch. How did they do here? I can't tell you, as I forgot to order them. Oops, must come back.

To finish, the table d'hote, astonishingly, offered cheese. And with no supplement. Extraordinary. Now while only one slice was brought - fair enough - it was a glorious, luxurious truffled pecorino. (My fellow diner tells me that there were two slices. Don't you just  hate pedants?) Wow! After a couple of espressos we were much more chilled than we had been an hour or so previously. First impressions on decanting into the street: a very fine meal. In subsequent analysis I pondered the Value for Money score for quite a while. Given the sumptuousness of the surroundings and the quality of the produce on offer, I think they have to be given the benefit of any doubt. There is a sea change which we diners have to be aware of. Brexit and transport costs are putting prices up; staff shortages will push up wages. I'd sooner eat somewhere like here once a month than at a cheap chain once a week. Buona fortuna, Signor Pieraccini, but please do something about the bread.