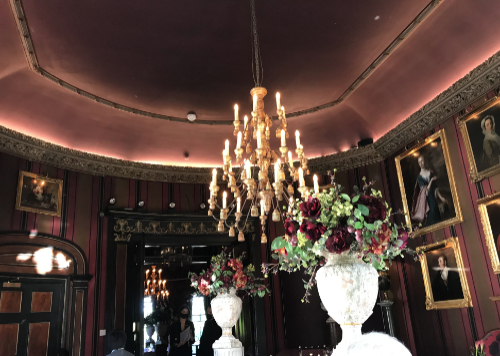 There may be finer places to stay than Prestonfield House, in the lea of the majestic crag of Arthur's Seat, but I can't think of many.

Described by the normally acerbic authors of The Buildings of Scotland Edinburgh as a compact but classy mansion, the current house was built in the late 17th century for Sir James Dick. Lord Provost of Edinburgh. No mean feat to become Lord Provost of the capital city as a Catholic in post Reformation Scotland. The man also had the fortitude to start again after his first house on the site was burned down by an anti Catholic student riot.

It became a hotel about sixty years ago and, when taken over by the legendary James Thomson early this century, it would be fair to describe it as tired. I dread to think how much the renovations may have cost, but it can live up to its website billing as the most glamorous hotel in town, if you like your glamour in a slightly over the top, opulent, baronial style. Lest that sounds catty, I've yet to meet anyone who doesn't fall in love with the place on sight.

I had arranged an overnight stay with dinner for one big celebration, but when that was postponed we moved it on to another one. The plan was to arrive early afternoon then go on a route march to work up an appetite. Instead we fell under the spell of the place. I couldn't single out any staff member for smiliness and charm: that applied to all of them, without a single exception. I don't carry many cares of the world these days, but any last vestiges drained away in the Edinburgh sunshine. In their place, comfortable wicker chairs in the garden, good coffee, an undemanding book, then it was time to crack the complimentary bubbly. (Prestonfield House own label, of course.) And so to dinner.

One of Sir James' descendants is credited with introducing rhubarb to Scotland, hence the name of the hotel restaurant. There is, incidentally no single restaurant space; instead various dining rooms welcome you on either side of the main corridor. There is also a salon privée, hidden just off a stone turret stair, where you can dine à deux if the fancy and the finances take you. At our age and stage the body of the kirk was fine for us. An endless stream of lovely people were on hand  to look after us effortlessly.

There's a warmth and feeling of generosity about the place. Usually, with a dinner and overnight break you are told firmly, and not always politely, that it's the set menu for you, the a la carte being reserved for your betters. In actual fact we had no surcharge: the cynic might say, at these prices I would think so too, but we'll come to that.

If you exclude the Sunday roast option (this being a Thursday) the set lunch is a 3:3:3 formation. The main courses on the carte are listed as Land and Air, Loch and Sea and Classic Sharing Dishes for Two. The sea beckoned. Before that a roast beetroot tartare (I don't think it was raw, but I could be mistaken) was much enjoyed, served with an apricot and poppy seed granola, and dressed with good olive oil. In the interests of diversity, I managed to see beyond crab with wild garlic mayonnaise for once, and had the monkfish starter. Its main accompaniments were cubes of new potato, smoked bacon and hazelnuts. A pleasant enough dish but the advertised flavouring with sea herbs and sorrel was either ultra delicate or underdone. Take your pick. Roast hake came with a small but substantial pot of shellfish flavoured risotto and a lemon purée, and left its recipient well pleased. As a piece of fish, the turbot was stunning, flavoured with seasoned butter and a marsala jus. There were a couple of reasonable size blobs on the plate. Rereading the menu I discover that one was olive oil mash, sorry purée. I still can't work out what the other one was. It had a hint of citrus but little body, like a potato subjected to the tender mercies of a so called high end chef.

Now here's the thing or, to quote the Prince of Denmark, the rub. Regular readers will note that I seldom mention desserts. That's partly because I don't have a particularly sweet tooth, but also because after two courses I'm generally full. My two courses, monkfish and turbot, substantial fish both, would have set me back £54.50 plus service, and I was still hungry. With some reluctance I asked for more bread, ostensibly to mop up the juices but, in reality, to stave off night starvation. Why reluctantly? Because, sad to say, it wasn't of the freshest.

Anyway, there's always cheese. Here you choose between Highland and Lowland. We shared the latter, featuring Cora Linn, Strathearn, Elrick Goat and a cheddar, served with oatcakes. And here's another rub. Well, two actually. The cheese wasn't in the best of nick, and the oatcakes weren't of the freshest. And, come to think of it the same could be said of the shortbread with the afternoon coffee. I do just wonder if the kitchen has failed to react to lower footfall, and is still making batches of the same size as pre The Great Plague. The trouble is that when you charge prices like these you sacrifice any possibility of forgiveness of your errors. Your debts, yes, your trespasses, of course, but at this level the customer is entitled to perfection.

Edinburgh taxis are very expensive, but you could still be quids in if, during your stay here, you got a cab to go to dine in any one of a number of places in town. And you know that the staff who waved you out and held the door for you when you came back would be some of the nicest people you ever met.