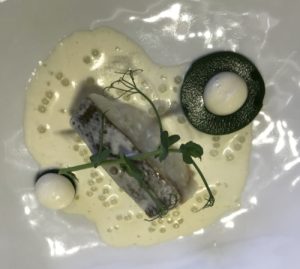 Màlaga's Paseo de la Farola is a modern bustling place. After the line of busy shops, a long row of eating places, each with its greeter, gently hustling custom. They are open to the world, allowing you to see beyond the menus, regard the kitchen, and decide where you want to sit.

There is one dignified exception. A glass box with an elegant patio area is home to José Carlos Garcia, one of three restaurants run by the eponymous Andalusian chef. It even boasts a different address, being just down from a venerable old chapel whose history escapes me.  A bamboo screen discreetly hides diners from the public gaze, but you notice the little red plaques which tell you that Sr. Garcia has had one Michelin star since 2021. 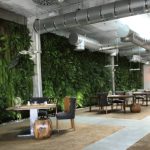 When booking, I had forgotten that Spanish eating times are much later than ours, so at 1 we had the room to ourselves. An airy bright box, with tables well spaced out. The modernity is emphasised by the gleaming exposed ducting. One wall is covered in greenery. This contrasts with the formality of the waiters' attire, classic dinner suits.

There is a choice of two menus, the full tasting menu which contains 21 items, or a shortened version. We go for the Full Monty. I had looked at the price when I booked. 126€ is not cheap, but it's madam's birthday next month. And, after all, it's not every day that a Scottish football team reaches a European final.

I suspect you wouldn't thank me for describing every morsel, but rereading the menu it's hard to know what to leave out. A batch of goodies arrived to kick things off. A semi liquid grapefruit sorbet was theatrically topped from a foam gun with something gin based. A wonderful concoction. Just don't bring me the wine to taste at the same time.

While the bread was nothing special its accompaniments most certainly were. How many aubergine dips have you sampled? Trust me, none will have been as good as this. Zurrapa blanca was butter whipped with pork bits and had the texture of rillettes. 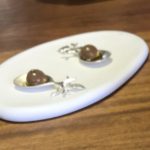 On two spoons there were two olives. So what, you ask? It's Spain. Well the menu had spoiled the surprise by labeling them liquid olives. Not so much a nod to Ferren Adrià as a bow. I'd read about this piece of genius but never encountered it. These were perfect facsimiles, down to the little stalks, but burst into liquid olive oil in the mouth. Our waiter Salva was less than amused when I mention this as an Adrià invention. No, he says firmly, it's a Garcia creation. OK, if you say so.

The menu is almost entirely fish and seafood. The next chapter scored three wows. A single oyster was covered with an unidentifiable cream and served in one of the restaurant's many eccentric plates, this one in the shape of cupped hands. A shot glass contained some wondrous whipped sea urchin, the ephemeral citrus foam or "air" adding little by way of flavour, but gaining points for sheer swank. Perhaps the dish of the day for me was a small rosette of bits of shrimp garnished with stuff in a little puddle of the most intense juice. Chicken stock? I asked Salva. No, red pepper.

A plate of scallop with cucumber and mustard seed was as pretty a dish as you've ever seen, spiced up with peppery micro herbs (this kitchen gets through a lot of them) and an extra drizzle of olive oil. Spanish oil, Salva assured us. Well, you were hardly going to serve us Greek stuff, were you? Don't get the wrong idea. By this time Salva (short for Salvador) and his colleague Erik were our good friends. Eating food of this quality makes one most jovial. 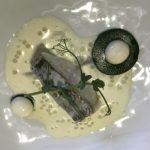 Cod with beurre blanc may be a classic, but you will rarely see it with tapioca pearls, tiny discs of spinach jelly and teeny blobs of intense cauliflower purée. Then another prawn. No, corrected Salva, a crayfish. Hey ho. It was on dramatically red, slightly crispy beetroot rice. Very fine, though a little heavy on the salt. And finally...

The sole carnivorous contribution to the feast came, unusually, in the form of a sweetbread with a most intense beef reduction. A hint of ginger, I was certain. Guess who put me in my place on that error?

The non cream eater was very well catered for on many occasions, never more so than at the pudding stage. A sliver of something that looked like crème caramel was a sort of jellified thing. I can't remember what I had but we were doing a lot of purring by the time the coffee 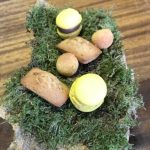 and petit fours arrived. After all the preceding pyrotechnics these were a little subdued.

Wine prices, while not cheap, were nowhere near the banditry levels to be found in most Michelin starred lists. So I knew what was coming when the bill arrived, or thought I did. Except, if you were paying attention, you may remember I talked about two menus. Turns out we weren't on the one I'd noticed. 198.50€ times two, plus wine plus service made this one of the priciest of meals. It took me a fair while to work out how to score this on value.  Well, it's not every day (or indeed every year) that you encounter such a masterclass of technique, presentation and content, but check your budget before you book.