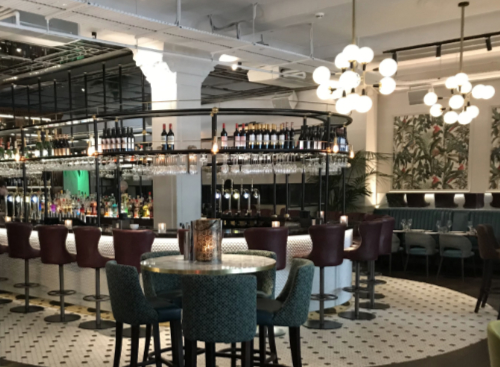 I have no idea who Ralph and Finn are, but at the outset of the first trip to Glasgow in a long while I discover they have a sibling called Vroni. Further research unearths the fact that there is another one called Ollie. For all I know, in best soap opera tradition, there may well be others out there. What I do know for certain is that they have an excellent pedigree. All will be revealed in the next episode. (OK, in a paragraph or two.)

It makes me shudder to realise that I have known ST for 55 years. She was a neighbour and, as you know, good neighbours can become good friends. No, not in the Scott and Charlene sense, just good pals. Then the oldies died and the houses were cleared. Half the country separated us, and it was down to the Christmas cards with the must meet up one of these days message. Eventually we did, lunching just before The Great Plague in this very room, when it was called Urban.

I knew nothing of the ownership. If you're not reviewing you don't have to. (You lot who simply go to restaurants to stuff your faces and swill booze, you don't know how lucky you are.) S and I had an apéritif (what the young refer to as pre-ing) in Vroni's, a wine bar of some distinction in nearby West Nile Street. Lo and behold, a sign on the wall exhorted us to visit Vroni's sister restaurant, Ralph & Finns.

Today's hero has been owned by the Tomkins family for 15 years. Dad Alan was given a Lifetime Achievement Award at the Scottish Bar and Pub bash in 2020. These things are not handed out like sweeties. The reins were handed over to daughter Emily and son-in-law Alan. The latter has a pretty decent track record of his own, having been involved at Ox and Finch, and Ka Pao for seven years. 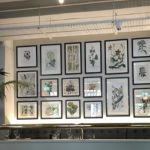 Urban was a great venue - a former bank, I'm guessing - but it had just run its course. For years it was a stylish go to place in the city centre, knocking out reliable food and always with a buzz. When S & I were there a couple of years ago it was a shadow of past glories. So the Tomkins did what good operators do, and started afresh. Literally afresh. The fairly nondescript bar which faced you on entry has gone, replaced by a magnificent marble island bar in the centre of the main dining space. The stylish prints - plants and birds - give a wow factor as you come in. A lot of flamingos glance your way as you walk around, and a cheerful parrot graces the market menu as if to aid your choice.

The design is by Mark Brunjes, whom I first met when he was an up and coming  in the 1990s. He could always be relied on for something stylish and out of the ordinary. The overall effect here is striking and just the right side of bling. 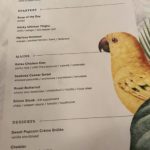 a menu in keeping with the place itself, one to please everyone, with a little panache. There's a market menu daily until 5.30. It lines up in a 3:4:3 formation and they are happy to let you pick and mix with the a la carte. Fish soup was in the oriental style with a base of crab and ginger, flavoured with coriander. A pork and pistachio terrine was a cut above the average, with an accompanying compote of apple and apricot.

To mains. From the market menu came a variation on a Caesar salad which I hadn't seen before, the leaves topped with a fillet of sea bass which was both generous and perfectly cooked. The highlight for me was a hazelnut crusted sole fillet. Although not described as such, its base was a good portion of petits pois à la française. A few of you commented on the recipe which I published the other week, and I have to say that this one was much better. The lettuce was properly wilted down, and there were pearl onions a-plenty. My heart goes out to the commis chef who had to peel them. Chips, ordered purely in the interests of research, were chunky and crispy and came with a gentle aioli.

All this was served by the lovely Lia. Both S & I could have sworn initially that she came from the States, but when we chatted to her a Donegal accent came out. We finished with good coffee and left with a new regular haunt in town to revisit and to recommend.