What we’re looking at today is the wonderful Nephrops norvegicus. I first encountered these in Wester Ross in the late 1960s when they were known to fishermen and consumers alike as prawns. Once we started to be inundated with imports from all over, the naming became confusing. The term Dublin Bay prawns was common – indeed, that’s the word Rick Stein employs in his definitive book, Seafood, first published in 2001. They were once referred to as scampi, since at one time that was virtually the only way they were eaten in this country. Back in my Wester Ross days, the processing plant took to boxing them and exporting them as Gairloch Baby Lobster Tails. Nowadays, for some reason, we seem universally to have adopted the French word, langoustine. For the purposes of this article I’m using the terms langoustines and prawns as interchangeable.  It is astonishing to imagine that in the 1950s Scottish fishermen would throw them back as being worthless. Equally remarkable that in an early food scam, people started making scampi using monkfish, since that too was considered to be unsellable otherwise. Speaking of food scams-

The Great Prawn Rip Off

Back in the day, no self-respecting fishmonger would dream of selling you a langoustine with the head and claws on unless you asked for it. These are of course great for stock, and many will claim that sucking the head is the best part. But do the sums. If you are forced to buy the full critter, this means that at least one third of your very expensive purchase is inedible. What next? Selling caviar and including the weight of the tin?

Prices vary enormously. Scanning the internet, you can get live langoustines delivered for about £17 – £35 a kilo depending on size. Expensive, you think? Read on. A London based company called Fine Food Specialists will charge you £135 for 2 kilos or, if you buy through Amazon, a mere £300.09 for the same quantity. This column enjoys a good laugh. At the other end of the scale, I know of a fishmonger, somewhere in Scotland, who will sell you a box of small fresh langoustine tails for £7. The last one I bought contained 46 of them. Where? Ha! Do truffle hunters tell you where they find their black gold? Tom Cooks! loves its readers, but there are limits.

If buying online, read the small print and make sure you are buying fresh, not frozen. So, now you have taken possession of your fine crustacea and parted with a little or a lot of cash, what are you going to do with them? Read the books and you will be thoroughly bamboozled. They will also confuse you as to when you should eat them, as prawns are available all the year round. According to the Marine Conservation Society, the season is from September to May. On the other hand Andy Smith of Castle Game Scotland (more details below) tells me that according to his best customer, one of Edinburgh’s most famous chefs, they come to their most succulent best around the time of the Wimbledon fortnight. 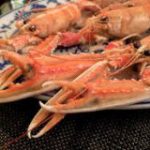 How to Prepare and Cook Langoustines

To disguise the fact that you are being sold a very small and expensive portion, restaurants will often cook and serve the head and claws. Unless you are a brain sucker (see above), there is virtually nothing edible in that part. Remove the head and claws (simply pull them off with a twisting motion) and set aside. The prawn is a simple creature. Its insides comprise a thin line of black gut running through the middle. It’s harmless but gritty and a little unpleasant to eat.  If you want to remove this (or de-vein, as it’s known) before cooking, here is a simple trick. Hold the body firmly and gently twist the tail fins one way then another. Pull, and the gut should come out smoothly.

Simple boiling is my preferred way of cooking prawns. If you want to ruin them, follow the books. Overcooked langoustines will turn to mush. You will be left sucking at some scraps and weeping over your wasted investment. Cooking times will vary a little according to size. The last batch I bought were quite big, about 9 to the kilo.

Bring a large pan of heavily salted water to a rolling boil. Have to hand another pan of iced water. Drop the tails into the boiling water and cook for 45 seconds (smaller ones may need as little as 30). Remove and plunge immediately into the iced water. I suppose if you are cooking the heads it may take longer, but there is a video on You Tube where a lady advised cooking for 3 – 4 minutes. Tellingly we didn’t see her eating them. The glory of this type of prawn is when the flesh is firm enough to come out in one piece, enabling you to bite into its glorious sweetness.

Peeling is a little fiddly until you get used to it. On each side of the shell, at the bottom, there is a horribly sharp ridge which can make this a painful process. Hold each side of the prawn between both thumbs and forefingers just above that ridge. Squeeze hard until the top of the shell cracks. You can then peel it off from the top, avoiding the pain-giving part below.

I would serve these cold. For me plain is best, with just a squeeze of lemon and a grind of black pepper. A good mayonnaise is always welcome. For these beauties I would make my own. Marie Rose sauce is a classic accompaniment, but for prawns of this quality, serve it or the mayo on the side. Don’t mask the delicate flavour.

The old cliché of Australian-ism, chuck another prawn on the barbie, is actually an excellent way of doing them. Split the prawn in two and grill on a BBQ for about 2 minutes, cut side up. They get a lovely smokiness. You can also cook them under a hot grill, in which case I would dot with garlic or herb butter. (Tarragon, dill and parsley all work very well). Again, a couple of minutes will do.

If I have one plea to you all, whatever you do, please don’t overcook.

And what of the heads and legs, you ask? I’m running out of space – that’s for another day. But finally-

To mayonnaise add a good amount of tomato ketchup (approximately 4 parts mayo to 2 of ketchup), a squeeze or two of lemon juice and some Tabasco (other hot sauces are available). Now the bit that most people forget – a splash of cooking brandy. Mix well together. Taste as you go, and find a blend that suits you. I prefer mine with a wee bit of a kick.

The best langoustines I’ve had lately have come from Castle Game Scotland, Trinlaymire Farm, EH49 6NF, just outside Linlithgow. They get them from Argyll. Availability and opening times may vary. Contact Andy Smith or Neil Gilmour on 07791 673060