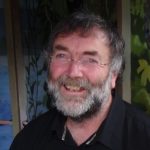 I asked readers for some other Christmas recipes. My good friend, celebrated artist Michael Greenlaw, answered the call. The only problem is that as he is wintering in the Algarve, hearty stews and steamed puddings aren't on his mind. Still these sound like crackers, so that's Christmassy enough for me.

Coincidentally I was thinking about a cataplaña the other day, and started doing a bit of research. What is clear is that, as with Spanish 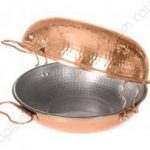 paella, there are numerous variations. (In some versions  of Michael's recipe, for example, no potatoes are used.) The other thing they have in common is the fact that they are both named for the pan in which they are traditionally cooked. In Michael's recipe he refers to a skillet. All that matters is that you have a fairly solid pan with a tight fitting lid.

First, a fine vegetarian dish, then the main event, pork with clams. You can usually get clams from a good fishmonger, though this week there were none in the market. Check their availability before putting this on your menu. The rules about clams are exactly the same as for mussels. Make sure the shells are clean, then rinse them to get rid of any grit. Discard any which don't close either during the washing process or when tapped - they are dead. Likewise, get rid of any which haven't opened during the steaming process.

Note that in making the pork dish you have to allow a minimum of two hours for marinading. 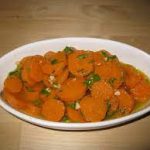 Given the fact that the country was occupied by diverse cultures for so long and is vastly known for being the main entrance to Europe, the Algarve in particular prospered into a very unique region. The Algarve was taken back from the Moors by the Kingdom of Portugal only in 1249 and for centuries was considered as a separate part of the country.

Boasting grand monuments like Moorish castles, places named with the “Al” prefix and special ingredients, this region is characterised by its predominant Arab influence – such as this recipe. In restaurants and taverns through this southern part of our country, you will find this simple marinated carrot preserve, made with cumin – one of the many ingredients that has become part of Portuguese traditional food.

Boil the peeled carrots for 15-20 minutes, with the bay leaf and sugar. They should not be overcooked. Turn off the heat. Drain the liquid and reserve for a soup. Cut the carrots into large slithers, big enough to be eaten with a toothpick.

Mix in the remaining ingredients except the cumin. Toast the seeds lightly in a non stick frying pan, to make them more aromatic, before tossing into your salad. Just make sure not to burn them!

The carrot salad will often be served at restaurants as an appetiser along with sardine paté, olives, butter and bread.

This sounds a very unlikely combination and I must admit I was a wee bit unsure of it when I first heard of it - but when I tasted it, my world lit up!

Living in Olhão, Portugal as we are currently, all kinds of seafood are readily available from the daily fish market and fresh clams cost €5 for a kilo.

This is relatively quick to cook - except for the 2 hour marinade, which if you know about it to start with, you can build it in to your prep time.

I dislike recipes where it all sounds quick and easy and you make a start only to find that you ought to have had the meat marinating for hours beforehand.

Many Portuguese recipes involve bay leaves and I seldom seem to cook without them these days, (we bought a massive bunch of them at the market the other day for 50c) and they add a lovely botanical depth to the cooking (like a good gin).

*In specialist shops such as Lupe Pintos you can buy red pepper paste. In Portugal it is known as massa de pimentão; however, as it is just a mixture of peppers, salt and oil, it is cheaper to buy a tin of red peppers and blitz a few to make your own paste.

Cut the pork up into 2cm squares and marinate for a couple of hours in a mixture of white wine, bay leaves, red pepper paste, garlic, salt, pepper and olive oil.

Cut the potatoes into cubes and fry till soft. Place on absorbent paper and set aside.

Drain the marinade from the meat, reserving the marinade for later. Heat the olive oil in a large skillet. When the oil is hot add the meat and fry on a low/medium heat until it starts to turn slightly golden, stirring occasionally.

Add the marinade to the skillet and boil for a few minutes. Add the clams, stir, cover the skillet with a tight fitting lid and cook until the clams start to open.

Turn off the heat, add the potatoes and sprinkle with chopped coriander. Mix carefully and serve immediately.